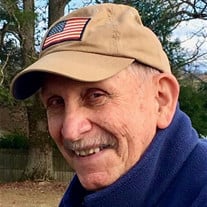 Jack Winston Larkey, a loving Christian, passed away on August 28th at the age of 81, surrounded by his family. Jack was a resident of Johnson City, TN since 1968, where he and his wife, Christine, raised their three children. Jack was a proud United States Marine Corps veteran. He was an active member of the local Marine Corps League for the last two decades, orchestrating various fundraising and charity events including a scholarship for Jr. ROTC students of which he was particularly proud. Jack graduated from ETSU with an Accounting degree that he used in his long career with Phillips, and later as a hobby, helping his oldest daughter with the accounting and books for her business. He loved spending time with his family and making wake up calls to his grandsons, determined for them to make it to class and work on time. He always looked forward to vacationing with his family at the beach, and his Christmas time tradition of getting together with his grandsons for chicken wings, which he affectionately called "the wing ding". Jack will be remembered for his kindness, his perseverance, and his loving nature. The lessons he taught and the stories he shared have preserved his legacy in the hearts of all that knew and loved him. He taught us how to be the best version of ourselves and to treat everyone around us like family. He was a simple man that was happy as long as the people he loved the most were happy and healthy. He was encouraging, insightful, and inspirational. One of his favorite things to tell his family, was "never, never give up." He will be missed, but never forgotten. Jack is preceded in death by his father and mother, Kenneth and Elizabeth Larkey, and brother, Gary. He is survived by his wife of 57 years, Christine Larkey, who he referred to as the love of his life; his three children Paige Tyree, Kristi Kostrzewa, and Kenneth Larkey; his six grandsons Winston Kostrzewa, Drew Kostrzewa, Blake Tyree, Evan Tyree, Daniel Tyree, and Ian Larkey, and his great granddaughter, Mable Tyree. The family of Jack Larkey will celebrate his life with a graveside committal service on Thursday, September 2, 2021, at 11:00 a.m. at Glenwood Cemetery in Bristol, Tennessee, with Blake Tyree officiating. Pallbearers will be Jack’s two sons-in-law, Terrance Tyree and Rich Kostrzewa, as well as his grandsons. Military honors will be provided by Daniel Boone High School ROTC and Johnson City VFW Post 2108. Memories and condolences may be shared at www.tetrickfuneralhome.com. Tetrick Funeral Services, 3001 Peoples Street, Johnson City, TN 37604, is honored to serve the Larkey family. (423) 610-7171 In lieu of flowers, please send donations to Daniel Boone High School Marine Corps ROTC at 1440 Suncrest Drive, Gray Tennessee 37615. This obituary was lovingly written by Jack’s grandson, Winston Kostrzewa.

Jack Winston Larkey, a loving Christian, passed away on August 28th at the age of 81, surrounded by his family. Jack was a resident of Johnson City, TN since 1968, where he and his wife, Christine, raised their three children. Jack was a... View Obituary & Service Information

The family of Jack Winston Larkey created this Life Tributes page to make it easy to share your memories.

Jack Winston Larkey, a loving Christian, passed away on August...

Send flowers to the Larkey family.