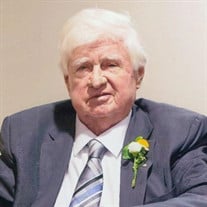 J. Levi Rhinehardt, age 99, of Bluff City, TN, passed away Sunday afternoon, September 6, 2020 at The Waters Rehabilitation and Skilled Nursing Center located in Johnson City, TN. Born July 20, 1921 in Young Harris, GA, he was the son of the late Bessie Sargent and Levi Rhinehardt. In April 1941, J. L. graduated from Towns County High School in Hiawassee, GA and began his college career at Young Harris College. However, in December 1941, he felt called to enlist in the United States Navy, where he served his country honorably in World War II. He was deployed on the USS Andromeda (AKA-15) Andromeda-class attack cargo ship where he served as a naval pharmacist mate and gunner. His tour began in North Africa where he participated in four invasions, including the liberation of Italy. Following this, his ship was directed to Okinawa where he participated in the largest naval flotilla ever assembled for invasion. His ship was then redirected to Japan and was off the coast when the atomic bomb was dropped, and he participated in the occupation of Japan. He was discharged in February 1944. Following service to his country, J. L. went to work for The Tennessee Valley Authority (TVA) as an electrician and electrical foreman, building substations in parts of seven states. He retired after 35+ years. While working in Bristol, he went into the Western Union to wire money to his family in Northeast Georgia and met the love of his life, Nina O’Dell. They were married on January 22, 1948 in Bluff City, TN. In addition to his parents, J. L. was preceded in death by his loving wife of sixty-one years, Nina O’Dell Rhinehardt, two brothers; O. L. Rhinehardt and C. L. Rhinehardt, and four sisters; Lucille Jennings, Clara Love, Daphne Thomas, and Ann Segrest. He leaves behind to cherish his memory, three daughters; Jean Noe (Minor), of New Albany, IN, Patricia Bush (Tim), of Malvern, OH, and Ginger Carver (Leonard), of Bluff City, TN, as well as two sons; Jimmy Rhinehardt (Annette), of Johnson City, TN, and Jerry Rhinehardt (Beth), of Bluff City, TN. J.L. and Nina were blessed with seven wonderful grandchildren; Nicole Koble (Brady), Nathan Bush (Carrie), Ashley Esquiagola (Anthony), Lindsey Clem (Steven), Jessica Woods (Aaron), Jared Rhinehardt (Rebecca), and Molly Casper (Heath), as well as eleven precious great-grandchildren; Piper Koble, Rowan Koble, Ethan Bush, Ashlyn Bush, Nina Esquiagola, Delia Esquiagola, Sullivan Clem, Willa Clem, Adelynn Rhinehardt, Lewis Casper, and Baby Girl Woods (arriving December 2020). He is also survived by his brother, H.L. Rhinehardt (Ruby), two sisters; Betty Dyer and Virginia Bradley, and many nieces and nephews who were all dear to him. As a young man, J. L. accepted Christ as his Lord and Savior and was baptized at the Woods Grove Baptist Church in Young Harris, GA. Throughout his life, he set a wonderful Christian example for all who knew him. He served on the board at Bluff City Christian Church, was appointed as a trustee of Avoca Christian Church, and most recently was a member of Poplar Ridge Christian Church. J.L. was an avid farmer. He loved riding his tractor, filling his barns with hay, and planting an enormous garden, often sharing his harvest with family and friends. J.L. placed great value on hard-work, reliability, and the development of fortitude, in himself as well as others. He was extremely proud of his family, and enjoyed sharing a meal with guests, many being students from Milligan College. Throughout his life, J. L. enjoyed fishing, a game of horseshoes, playing Rook, and in his later years, playing golf. Additionally, he was a member of the International Brotherhood of Electrical Workers and a proud member of the NRA. He also loved to have breakfast at Hardees with all his buddies. The family would like to extend a heartfelt thank you to the staff members of The Waters Rehabilitation and Skilled Nursing Center for the loving care they provided during the past two years. In lieu of flowers, the family requests that memorial donations be made in memory of J. L. Rhinehardt to the Fellowship of Christian Athletes (FCA), 1840 Holston Drive, Bristol, TN, 37620, as they become an integral part of the newly developed nonprofit Impact Community Center of Bluff City, TN. A private graveside service for J.L. Rhinehardt will be held at the Poplar Ridge Cemetery, Piney Flats, TN with Mr. Evan Wolf officiating. A celebration of life service will be held at a later date. Due to the COVID-19 pandemic, Sullivan County is mandating that all citizens who live in or visit wear masks or facial coverings in public. Also, social distancing recommendations must be observed.

The family of J Levi Rhinehardt created this Life Tributes page to make it easy to share your memories.

Send flowers to the Rhinehardt family.