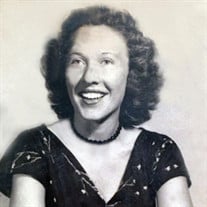 Ida Neal Hale, age 88, of Elizabethton, passed away peacefully in her sleep. Mrs. Hale was of the Methodist faith and a native of Sullivan County and the daughter of the late Arthur Clinton Neal and Emma Mae McCrary Neal. Mrs. Hale was preceded... View Obituary & Service Information

The family of Ida Mae Hale created this Life Tributes page to make it easy to share your memories.

Send flowers to the Hale family.