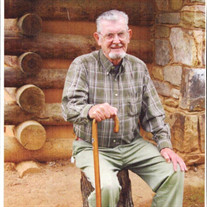 To watch livestream of service, click on the link below. https://view.oneroomstreaming.com/authorise.php?k=1618356843110526 John 14: 2-3:… I go to prepare a place for you. And if I go and prepare a place for you, I will come again, and receive you unto myself; that where I am, there ye may also be. On Friday, April 9, our Lord finished a place for Pop and came and received Herbert (Jay) Wilson, Jr. into his presence. Pop was a spry 81 years young going into eternity and had lived in Elizabethton for most of his life prior to his change of address. He was born in Yancey County, NC to the late Herbert Wilson, Sr. and the late Bonnie Gardner Wilson. Joining Pop in a joyous reunion will be his parents, the love of his life, Doris Campbell Wilson, and a son, Terry Allen Wilson. Pop was a baker by trade and anyone living in Elizabethton in the 70’s or 80’s is surely familiar with Variety Bakery where he worked. Pop loved his family and poured himself into helping them as much as he could. He loved his Lord and listening to the Word both at church and home. Each spring, he looked forward to Braves baseball and rarely missed a game. Having his grandchildren and great grandchildren visit him always brought joy to his heart and he would allow the little ones to crawl over him and play as much as he was able to. Now, he awaits the rest of his family and friends to join him in his eternal home around the table that the Lord has prepared for those that love him and place their trust in Him. We’ll see you later Pop!! Those left to cherish Herbert’s legacy include his daughter, Judy Jones McAmis and husband Tim of Elizabethton; sons, Kelly Wilson and wife Jessie of Elizabethton, Jerhia Wilson and wife Heather of North Carolina, Justen Wilson and wife Mary of New York; grandchildren, Shondar McKinney of Nevada, Gavin McKinney and wife Anna of Fort Hood, Texas, Derek Wilson and wife Emily of Elizabethton, Christopher Wilson of Elizabethton, Michael Wilson of Greeneville, Sarah Wilson of Elizabethton and Sophia Wilson of Elizabethton; great grandchildren, Kayden McKinney, Marcellus McKinney, Annabella Wilson, J.J. Wilson and Dorian Wilson; and his sisters, Naomi Causby, of Elizabethton and Georgia Wright, of Whidby Island, Washington. A service to honor and celebrate the life of Herbert will be conducted at 7:00 PM on Thursday, April 15, 2021 at Tetrick Funeral Home, Elizabethton with Pastor Mark Potter officiating. The graveside service will be Friday, April 16, 2021 at 11:00 AM at McDowell Memorial Park, 327 Memorial Park Road, Marion, NC. Honorary pallbearers will be Jerhia Wilson, Justen Wilson, Gavin Wilson, Derek Wilson, Christopher Wilson, Michael Wilson and Steve Shepherd. Everyone will meet at the cemetery at 10:50 AM. The family would like to express a special thank you to Amedysis Hospice of Elizabethton, staff of Johnson City Medical Center and special friend and brother in Christ, Steve Shepherd. Those who prefer memorials in lieu of flowers, may make donations to Valley Forge Freewill Baptist Church, 1503 Riverview Drive, Elizabethton, TN 37643. Online condolences may be shared with the family on our website, www.tetrickfuneralhome.com Tetrick Funeral Home, Elizabethton is honored to serve the Wilson family. Office 423-542-2232, service information line, 423-543-4917.

The family of Herbert Wilson Jr created this Life Tributes page to make it easy to share your memories.

Send flowers to the Wilson family.