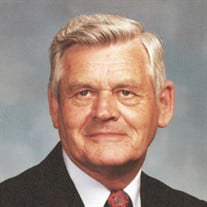 To watch livestream of service, click on the link below. https://view.oneroomstreaming.com/authorise.php?k=1622760025118552 HAROLD “BUDDY” LITTLE Harold “Buddy” Little of Elizabethton, age 94, passed away Wednesday, June 2, 2021 in the Johnson City Medical Center following an illness of three weeks. Buddy was born in Carter County on May 25th, 1927. He was the son of the late H. Clay and Florence Miller Little. Buddy was a faithful, active and lifetime member of the Valley Forge United Methodist Church. He was a U S Army veteran of World War II, having served in the European Theatre. He was a recipient of the Army of Occupation and the World War II Victory Medal. Buddy attended Elizabethton High School and was drafted prior to graduation his senior year. In 2001 he received his Elizabethton High School diploma along with twelve other veterans who were drafted during their high school senior year. Buddy was a member of the Teamsters Union having driven a truck for Beaunit Fibers and retired from Mason and Dixon Trucking. He started working at Tetrick Funeral Home in 1982 where retired in 1992, but continued to work as an ambassador for many years. Buddy was a loyal Elizabethton High Cyclone fan and a member of the Republican Party. Buddy was one of the kindest people you ever met. He was always kind to the less fortunate and loved animals. His favorite dog and best friend was Luke, a Labrador. Buddy was preceded in death by two sisters, Christine Flannary and her husband Jimmy and Beryle Laws and her husband John, one brother Earl Little and his wife Barbara, and a brother-in-law Randall Baldwin. Buddy is survived by his wife of sixty-six years, Trilla Smith Little of the home, one daughter, Jan Malone and her husband Mike, one son Chris Little, one grand-daughter Breanna Little whom he adored, one sister Evelyn Baldwin, his special grand-dog Rudy. Several nieces, nephews and cousins also survive. The family thanks Shirley and Jessica Taylor, two special people in Buddy’s life, for their friendship through the years. A service to celebrate the life of Buddy Little will be conducted at 2:30 PM Sunday in the Chapel of Peace of Tetrick Funeral Home, June 6, 2021 with Rev. Willie Campbell and Brother Nathan Dugger officiating. Music will be under the direction of Judy Little and Linda Baughman. The service will be livestreamed and may be viewed at 2:30 PM on Sunday or you may view at your convenience after the service on Sunday. Those wishing to view the livestream may visit www.tetrickfuneralhome.com and click on the obituary for Buddy. Under his obituary you will find a link to the One Room Livestream, simply click on the link and you will be directed to the service. Interment will follow at Happy Valley Memorial Park in the Garden of Gethsamane with Rev. Brent Nidiffer officiating and Dale Williams, soloist. Active pallbearers will be Chris Little, Mike Malone, Josh Baldwin, Malcolm Howard, Jeff Davidson, Kenneth Jewitt and Joe Nave. Honorary pallbearers will be; Michael Little, Kim Birchfield, Joe Taylor, Richard Tetrick, Tyler Tetrick and Mike Laws. The family expresses their gratitude and appreciation for their support and visits from Buddy’s Sunday School Class, the members of Valley Forge United Methodist Church, and Rev. Ray Amos. Special thanks to Dr. Whitfield and Dr. Brock and the nurses at Johnson City Medical Center for their care during Buddy’s illness. The family thanks Richard Tetrick for his support and friendship through the years. The family will receive friends from 12:30 PM Sunday afternoon in the chapel of the funeral home till the service hour. The family requests those who wish to make donations in memory of Buddy may donate to the Building Fund of the Valley Forge United Methodist Church, 3974 Highway 19 E, Elizabethton or Guiding Eyes for the Blind, 611 Granite Springs Road, Yorktown Heights, NY 10598. Tetrick Funeral Home, 211 North Riverside Drive (423) 542 2232, is honored to serve the family of Buddy Little.

The family of Harold "Buddy" Little created this Life Tributes page to make it easy to share your memories.

Send flowers to the Little family.