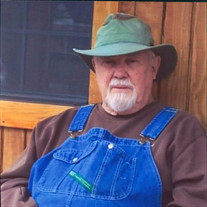 I have fought a good fight, I have finished my course, I have kept the faith: II Timothy 4: 7-8 (KJV) H. Wayne Ayers, at the age of 83 years and 7 months, of Johnson City, Tennessee went home to be with his Lord on June 10, 2020 at his home, surrounded by his family following an extended illness. Wayne was born in Bakersville, North Carolina to the late Marshall and Mattie Ellis Ayers. In addition to his parents, he was preceded in death by a brother-in-aw, Don Hobson; and a nephew, Thomas Beutell. Wayne was hardworking and dedicated. He was a fighter and had a drive to live and have his family beside him. Wayne was a great father, husband, brother and friend. He was owner and operator of his self-made Roan Valley Christmas Tree Farm and was a three time Christmas Tree Champion and the National Christmas Tree Champion in 1992. He presented one of his prize Christmas trees to President Bill Clinton and wife Hillary at the White House. Wayne was a proud United States Army and Air Force veteran and attended Edgefield United Methodist Church. In addition to his famous Christmas Tree Farm, he also owned the Ole Barn Restaurant. In his spare time, Wayne enjoyed classic cars, traveling, building and beautifying all things with family and friends and of course his joy, farming. Those left to continue Wayne’s legacy include his loving and devoted wife of sixty three years, Joan Ayers, of the home; his sons, John Ayers and fiancé Paula Hubbard and Steve Ayers and wife Sherry; his grandchildren, Johnathon Ayers, Austin Ayers and Eli (Leroy) Ayers; John’s fiancé’s children, Matthew Hubbard and Jonathan Hubbard; a sister, Joan Beutell and husband Tommy; sister-in-law, Camille O’Neill and husband Tim; two nieces, Maggie O’neill and Renee Beutell; and another sister-in-law, Jean Hobson. A service to honor the life of H. Wayne Ayers will be conducted at 2:00 PM on Sunday, June 14, 2020 in the Chapel of Peace at Tetrick Funeral Home, Elizabethton with Pastor Estel Williams, officiating. The family will receive friends from 12:00 PM until 2:00 PM in the funeral home chapel, prior to the service on Sunday. The graveside service will follow in the Ayers Family Cemetery. Active pallbearers will be Johnathon Ayers, Austin Ayers, Eli Ayers, Tim O’Neill, Chavin Arvizu and Jonathon Hubbard. Honorary pallbearers will be George Morgan, Dale Hodge, Marvin Hobson, John Smith, Bill Smith, Terry Peterson and Charlie Allen. Those who prefer memorials in lieu of flowers, may make donations to St. Jude’s Children’s Hospital, 501 St. Jude Place, Memphis, TN 38105. The family would like to extend a special thank you to the doctors, nurses and staff of the James H. Quillen VA Medical Center and to Avalon Hospice for the love and care shown to Wayne and his family during his illness. Online condolences may be shared with the family on our website, www.tetrickfuneralhome.com Wayne and his family are in the care of Tetrick Funeral Home, Elizabethton. Office 423-542-2232, service information line, 423-543-4917.

I have fought a good fight, I have finished my course, I have kept the faith: II Timothy 4: 7-8 (KJV) H. Wayne Ayers, at the age of 83 years and 7 months, of Johnson City, Tennessee went home to be with his Lord on June 10, 2020 at his home,... View Obituary & Service Information

The family of H. Wayne Ayers created this Life Tributes page to make it easy to share your memories.

I have fought a good fight, I have finished my course, I have...

Send flowers to the Ayers family.