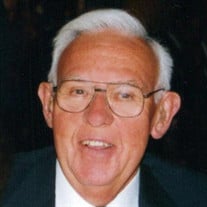 George Allen Simmons, age 84, of Elizabethton, Tennessee went home to be with his Lord and his loving wife on Monday, March 15, 2021 from his residence. In addition to his parents, he was preceded in death by his wife of 39 years, Patricia Louise Samples Simmons in 2019. George was born in Headwaters, Virginia, the first child of Clyde and Mary Evelyn Simmons. The family ran a sawmill, where George began working at age 10. George attended Berea College in Kentucky, majoring in education. It was at Berea that he met Margaret De Hart, who he married. The couple moved to Lorain, where George became an elementary school teacher. He completed his Master’s Degree in education at Kent State University. The couple then moved to Chicago, where he worked in educational publishing. He worked on a series of books for young readers written in phonetics and Space Age Spelling, which came complete with a set of puppets. They moved back to Ohio where George took a job teaching speed reading at the new Lorain County Community College (LCCC). George went on to become the Director of Developmental Education at LCCC. He strongly believed that students who lacked basic reading or math skills could still complete college with the right course work. George was perhaps most proud of teaching reading to a man with cerebral palsy, who had not had the benefit of a regular K-12 education. That man went on to graduate from LCCC. George’s responsibilities were eventually expanded to include heading the education and physical education departments. He was known for “reining in spending”. An avid (if only rarely successful) hunter, George took a group of friends from LCCC to his childhood home in Headwaters for a week-long deer hunt for many years at Thanksgiving. He also developed an interest in aviation and learned to pilot a glider in his 40s. George and Margaret divorced in 1982. George married Pat in 1983 and loved her until the day he died. George and Pat were a great team. They worked during retirement renovating and managing residential properties. They enjoyed touring in their motor home and antiquing. The shared their home with Bristol Motor Speedway fans before AirBNB was even a thing! The attended church together regularly through the years. George was a member of First United Methodist Church of Elizabethton, where he had served as the Adult Men’s Class Sunday School teacher on a monthly rotation with Bill Armstrong, Carroll Broome and Don Tetrick. He had also served on the church’s administrative counsel. Those left to continue his legacy include his daughter, Cynthia Simmons; his two sons, Daniel Simmons and wife Catherine and Mark Simmons and wife Jen; his step son, Paul Meyers and wife Rhonda; one sister, Janice Warner; and two brothers, Robert L. Simmons and Roger Simmons. Several nieces and nephews and many grandchildren and great grandchildren also survive. A service to celebrate and honor the life of George Allen Simmons will be conducted at 1:30 PM on Sunday, May 2, 2021 at First United Methodist Church of Elizabethton with Reverend Raymond Amos, Sr. officiating. Those who prefer memorials in lieu of flowers, may make donations to First United Methodist Church, 325 East E. Street, Elizabethton, TN 37643. Our staff is committed to taking care of our guests and families that we serve. Please understand we will be following the State’s COVID guidelines. We also ask all guests and family members attending visitations and funerals to please bring and wear a mask. Online condolences may be shared with the family on our website, www.tetrickfuneralhome.com. Tetrick Funeral Home of Elizabethton is honored to serve the Simmons family. Office phone (423) 542-2232; obituary/ service information line- (423) 543-4917.

George Allen Simmons, age 84, of Elizabethton, Tennessee went home to be with his Lord and his loving wife on Monday, March 15, 2021 from his residence. In addition to his parents, he was preceded in death by his wife of 39 years, Patricia... View Obituary & Service Information

The family of George Allen Simmons created this Life Tributes page to make it easy to share your memories.

Send flowers to the Simmons family.