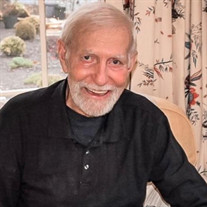 Reverend George William Gross Elizabethton, TN George William Gross, age 80, of Elizabethton, TN, went to be with his Heavenly Father on January 17, 2022. George was born in Jonesborough, Tennessee, on February 22, 1941. He was one of three children born to William Henry Gross and Margaret Britt. He was raised by his grandparents, James Oscar Gross and Sarah Elizabeth Shaver. He attended Stranahan High School prior to serving in the US Army from 1958 to 1961. During his time of service, he was stationed in Germany. After leaving the military, he married Sylvia Ruth Pettit in 1967. George discovered Christ and surrendered his life to the Lord on January 12, 1969. In 1976, he graduated from RHEMA Bible Training College which led to his life-long journey as an evangelist and pastor. Furthering his mission to serve Christ, he served as a Harvester’s Christian Fellowship Board member, ran Agape Christian Bookstore, and had a ministry program on WIDD in Elizabethton, TN. Preceding his retirement, George was the primary pastor of Word Prevails Fellowship for ten years. Throughout his life, he worked as a brick mason. He built numerous structures across East Tennessee. George’s passion for Christ touched many lives and brought generations to eternal salvation. His missionary work extended to the Bahamas. He was a man of generosity, encouragement, devotion, faith, humility, and stewardship. God’s light shined through George bringing joy to all surrounding him. His family, children, grandchildren, and friends held him in high esteem and cherished every moment with him. George had many interests outside of his ministry. He was an avid fisherman, hunter, gardener, hiker, and outdoorsman. He had great admiration for the mountains, sunsets, water sports, cars, gospel music, card games, Tennessee football, and a fresh cup of coffee. His life was filled with adventure and love. He will be dearly missed by all. He was preceded in death by his wife, Sylvia Pettit Gross; his parents, William Henry Gross and Margaret Britt; and his infant sister, Mary Ann Gross. George is survived by his son, Dan Wagenseller of Corona, CA; his daughter Tammy (Kevin) Kiernan of Beaufort, SC; his son Ronnie (Helen) Wagenseller of Elizabethton, TN; his daughter Kimberly (Jeff) King of Cookeville, TN; his daughter Rebekah (Kevin) Leiva of Pigeon Forge, TN; his son Caleb (Dekodha) Gross of Elizabethton, TN; and his daughter Amy Gross of Nashville, TN. He is survived by former spouse, Joy Frizzell Mullins, mother of Rebekah, Caleb, and Amy. George has nine treasured grandchildren Dustin Wagenseller, Mallory (Justin) Evans, Craig (Brandi) Wagenseller, Daniel Josiah Wagenseller, Abbie Wagenseller, Chase Julian, Chelsea (Ontario) Erby, Cherish Julian, Logan (Justin) Davidson, Savanna Wagenseller, Madison (Caleb) Ray, Sydney King, McKenzie King, Chloe King, and Audrey King. George is also survived by his sister, Judy Anne Cotter of Crossville, TN; his nieces Nancy Webb, Kristina Hobbs, and Angela Bunch; and seventeen great-grandchildren. Please join us at River’s Edge Fellowship located at 1200 19E Bypass Elizabethton, TN on Saturday, January 22, 2022, at 12:00 pm for visitation. A celebration of life service will follow at 1:00 pm. Succeeding will be the burial at Rooty Branch Cemetery located at 551 Rooty Branch Road, Bristol, TN. Online condolences and memories of George may be made at https://www.tetrickfuneralhome.com/. Care for George’s family has been entrusted to Tetrick Funeral Home, 211 North Riverside Drive, Elizabethton, TN 37644.

The family of George William Gross created this Life Tributes page to make it easy to share your memories.

Send flowers to the Gross family.