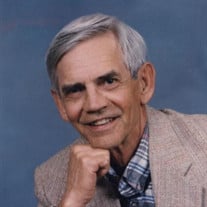 Mr. Gene C. Gouge, 89, of Johnson City, passed away Saturday, January 22, 2022, in the James H. Quillen VA Medical Center. Gene was born on January 6, 1933, and grew up in Carter County, but lived most of his life in Johnson City. He was the son of the late Dalton and Lona Gouge. He graduated from Happy Valley High School and attended ETSU. One of his proudest moments was being a member of the Happy Valley High School basketball team who were State Champions in 1950. He was an US Army veteran and served during the Korean era. Gene married his loving wife of 64 years, Betty Jones Gouge. They had three children, Mark and his wife Melinda, Gina Speropulos and husband Pete and Eric Gouge; three grandchildren, Peter Speropulos and wife Jess, Nicholas Speropulos and Caroline Gouge; seven little grand-daughters; their beloved little dog Madaline Rose; several nieces and nephews. Gene worked for Pet Dairy delivering milk and retired as a supervisor. Upon retirement, Gene became a member at Pine Oaks Golf Club and played golf often and also volunteered as a ranger for years. He was also an avid ETSU basketball fan and he loved the Atlanta Braves. Gene and Betty were founding members of Boone Trail Baptist Church where he served as a deacon. In the last few years they became members of Pinecrest Baptist Church. In addition to his parents, Gene was preceded in death by two brothers, Murriel and Vernon Gouge; sister, June Gouge Miller. A graveside committal service for Mr. Gene C. Gouge will be conducted at 1 pm Thursday, January 27, 2022, at the Mountain Home National Cemetery with Pastor Garry Edwards officiating. Active pallbearers will be selected from family and friends. The Veterans Honor Guard DAV #39 will accord military honors. Minister, family and friends are requested to meet at the cemetery by 12:45 pm Thursday. In lieu of flowers, memorial contributions can be made to St. Jude’s Research Hospital or Washington County Animal Shelter.

Mr. Gene C. Gouge, 89, of Johnson City, passed away Saturday, January 22, 2022, in the James H. Quillen VA Medical Center. Gene was born on January 6, 1933, and grew up in Carter County, but lived most of his life in Johnson City. He was the... View Obituary & Service Information

The family of Gene C. Gouge created this Life Tributes page to make it easy to share your memories.

Send flowers to the Gouge family.