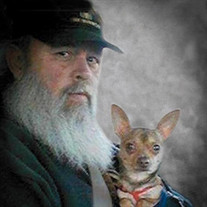 Gary B. “Crow” King, 72, of Boones Creek, passed away on Wednesday, December 8, 2021, from a lengthy illness at the James H. Quillen VA Medical Center. Mr. King was born June 21, 1949, and was the son of the late Ray King and Louise Bowman King. He was preceded in death by his grandparents, Robert and Grace Bowman; uncles and aunt, Jim and Peggy Bowman and Bill Bowman. Mr. King went to Boones Creek High School and straight to the US Army. He served his country proudly during the Vietnam War. He loved hunting, fishing and playing pool. Crow loved his Harley motorcycles and made many lifelong friends on his adventures. He was an electrician and truck driver most of his life. Survivors include his two brothers, Jerry King and Richard King; nieces, Deana King Morganstern and her husband Matthew, Julie King Stockton, Devona King Jessee and Rebecca King Dickenson; nephew, Michael King; several great nieces, nephews and cousins. Then there is Beaner his four legged baby who will actually be making the journey with him. A few special friends, Roger, Connie and Andrea Herman. The family would like to thank all the doctors, nurses and staff at the VA hospital who took amazing care of him during his final journey. In lieu of flowers donations can be made to any Veteran Charity including the DAV and Wounded Warrior Project, as well as the Washington County Animal Shelter. The family of Gary B. “Crow” King will receive friends from 5 to 7 pm Tuesday, December 14, 2021, at Tetrick Funeral Services. The funeral service will follow at 7 pm with Pastor Richard Bawgus and Mr. G. Clinton Andrews, Minister officiating. The graveside committal service will be conducted at 1 pm Wednesday, in the Mountain Home National Cemetery Annex. Active pallbearers will be selected from family and friends. The Veterans Honor Guard DAV #39 will accord military honors. Family and friends are requested to meet at the cemetery by 12:50 pm Wednesday.

The family of Gary B. "Crow" King created this Life Tributes page to make it easy to share your memories.

Send flowers to the King family.