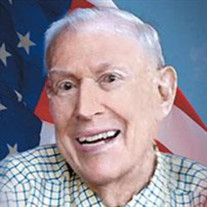 Frank Jackson Shepherd, age 92, affectionately known as Pe Paw by his family, died November 9, 2021 after a long illness. He was surrounded by family and friends. He was born in Elizabethton on December 15, 1928 to Bill and Hazel Shepherd. Although he called many places home, Elizabethton was his true home. Frank was preceded in death by the love of his life, Mary Martin Shepherd. They were married for 68 years. They were blessed with three children, Ann, Bill and Patti (Ann S. Osborne, William M. Shepherd and Patti S. Parker), along with a son and daughter in law, James D. Osborne and Hilda O. Shepherd. PePaw has 10 beloved grandchildren, Beth O. Allen (Charlton), Courtney Sharrett (Larry), Amanda Warren (Andy), Hannah Smith (Terrence), Jessie Parker, Joy Shepherd, Martin Shepherd (Mary Katherine), Jonathan Shepherd (Kelly), David Shepherd (Brooke), and Stephen Shepherd. He had 13 great grandchildren. His family was the joy in his life and he loved us unconditionally. He was preceded in death by his brothers, William and Robert Shepherd and his beloved in laws, Jess and Jessie Martin, Elsie and Raymond Issacs, Peggy and Lloyd Meredith. He is also survived by several nieces and nephews, both locally and in Louisiana and Chicago. Frank loved to sing and had a beautiful voice, he has blessed many with his talent. Frank loved sports and excelled in many: golf, swimming, football, and softball. Frank joined the Army at the age of 17 and served for two years during World War II. He has been blessed by all the many wonderful services the VA has provided him. His jobs were numerous, to name a few, he was the director of three Boys Clubs over a span of 22 years, Kingsport, Elizabethton and Decatur, Alabama being the longest by far. Frank worked in the wave pool industry when they were first introduced to the US. He was the director of Point Mallard Park in Decatur, Alabama and the director of amenities for the State of Georgia on Jekyll Island. The ones he will be most remembered by are Curtain Creations, Merry Mary Shoppe, and the Doe River Inn. Frank has been a Gideon for decades and loved visiting churches, supplying bibles and sharing God’s word. He has been an active member of First Christian Church and cherished his church family. Although he was not a man of means, he was rich beyond measure in all the ways that mattered. “Others” is his favorite song and his life’s motto. Services will be held at First Christian Church, Elizabethton, Tennessee on Friday, November 12, 2021 with Mr. Michael Klaus, Minister, officiating. Visitation will be held from 10:00 AM until 12:00 PM with the services to follow. The graveside will follow at Happy Valley Memorial Park. Active pallbearers will be Martin Shepherd, Jonathan Shepherd, David Shepherd, Stephen Shepherd, Andy Warner and Terrence Smith. Jerry Moody will serve as honorary pallbearer. Those who prefer memorials in lieu of flowers may make donations to First Christian Church or to Amedysis Hospice Care in Elizabethton, Tennessee. The family would like to extend with great appreciation a heartfelt thank you to Betsy Osborne and Nancy Berry for their wonderful love and care. Online condolences may be shared with the family on our website, www.tetrickfuneralhome.com, Tetrick Funeral Home, Elizabethton is honored to serve the Shepherd family. Office 423-542-2232, service information line, 423-543-4917.

Frank Jackson Shepherd, age 92, affectionately known as Pe Paw by his family, died November 9, 2021 after a long illness. He was surrounded by family and friends. He was born in Elizabethton on December 15, 1928 to Bill and Hazel Shepherd. Although... View Obituary & Service Information

The family of Frank Jackson Shepherd created this Life Tributes page to make it easy to share your memories.

Send flowers to the Shepherd family.