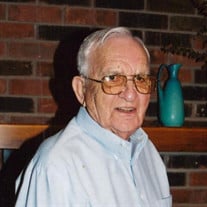 Frank E. Head, age 106, of the Range Community went home to be with the Lord on Monday, October 11, 2021 at James H. Quillen VA Medical Center CLC. Frank was born March 19, 1915 in Limestone Cove, Unicoi County to the late William John and Dora Byrd Head. In addition to his parents, he was preceded in death by his beloved wife, Marie Hart Head; a sister, Mae White and four brothers, Jessie, Carl, Blake and Sherman Head. Frank was the youngest Circuit Court Clerk ever elected in Unicoi County. He was drafted into the United States Army on October 16, 1942 and Marie, his bride of barely six months, was appointed to serve as Circuit Court Clerk in his absence. When his daughter Judy Marie was born, Frank returned briefly before being shipped out to the South Pacific. He served mostly in New Guinea and the Philippines. He returned to home and family when Judy was three years old. During his military service, Frank served in the third Brigade in a platoon of approximately 40 soldiers because the number varied as a result of casualties. He maintained a friendship with many of his friends during the war by phone, letters or visits until his age prevented or death broke their special bond in life. Even still, they all remained in his heart. He is the only surviving of these friends and brothers in a time of war. He could still name most of his “buddies in war” and tell a story about each of them. He loved them very much! After his military service, Frank attended Slagle’s United Methodist Church after moving back to Carter County and served as Trustee for many years. He attended regularly until his health prevented his attendance. He dearly loved Slagle’s United Methodist Church and missed his church family. Frank served as the President of Range Community Club. In 1954 he was elected Commissioner of the 13th District. He resigned after serving 24 years in that capacity. Frank was an active member of the Republican Party, Board of Directors for the Watauga Volunteer Fire Department (which he helped found). He was also a member of the Watauga Mason’s Lodge and the American Legion. He served on the Carter County Planning Commission in addition to being a member of the East TN Development Commission, and served as a delegate to the Governor’s Conference on Aging. Frank has spent his many years loving his family, friends, community and country serving others as best he could. Those left to cherish his memory include his daughter and son-in-law, Judy and Clarance Reed of the Range Community; two grandsons and spouses, Danny and Myoka Reed of Hampton and Clinton and Mary Reed of the Range Community; a great-granddaughter and spouse, Wendy and Ward Tanner of Johnson City; two great-grandsons and spouses, Austin and Lacee Reed of Stoney Creek and Lucas and Caitlin Reed of Atlanta; a great-great-granddaughter, Kate Reed (daughter of Austin and Lacee) of Stoney Creek; and a treasured and dearly loved friend and companion, Delores Jarrett of Roan Mountain. A service to celebrate the life of Frank E. Head will be conducted on Thursday, October 14, 2021 at 2:00 pm at Tetrick Funeral Home, Elizabethton with Pastor LeAnn “Lou” Crandle officiating. Music will be under the direction of Mr. Dale Williams, soloist and Mr. Scott Reynolds, pianist. The family will receive friends prior to the service on Thursday from 12:00 pm until 2:00 pm. at the funeral home. The graveside service and interment will be immediately following the service at Happy Valley Memorial Park. Military Honors to be conducted by VFW Boone Damn #4933. Active pallbearers will be Clinton Reed, Danny Reed, Austin Reed, Lucas Reed, Ward Tanner, Bobby Ray, WA Renfro and Clarance Reed. Honorary pallbearers will be John Riddle, Eddie Nikazy, his treasured church family of Slagle’s United Methodist Church, Beecher O’Quinn, Junior Stanley, Russ Swanay, Tony Bowers, Doug Smalling, Dr. Aninyei, Dr. Paul, Wayne Mottern, his friends and neighbors of the Range Community, Doctors, Nurses and staff of CLC, VA Mountain Home, Larry Jarrett, Terry Jarrett, Bobby Stout, Rolling Thunder, Brad Johnson, Ethan Troutman and Cameron Troutman Fair. After a serious fall breaking a hip and leg in 2018, Frank made his home in the CLC VA Mountain Home under the watchful and loving care of the angels that cared for him. Each of his caregivers cared for him with unmeasurable commitment, kindness and respect. He was truly happy there. “Thank you” could never be enough to say to each of those that loved and cared for him. Those who prefer memorials in lieu of flowers, may make donations to Slagle’s United Methodist Church, 285 Old Watauga Road, Elizabethton, TN, 37643. Online condolences may be shared with the family on our website, www.tetrickfuneralhome.com, Tetrick Funeral Home, Elizabethton is honored to serve the Head family. Office 423-542-2232, service information line, 423-543-4917.

The family of Frank Head created this Life Tributes page to make it easy to share your memories.

Send flowers to the Head family.