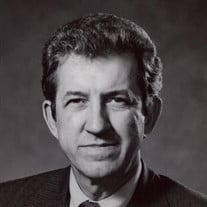 Franklin Delano Benton Banker & Financial Planner Frank Delano Benton, born in Autauga County, Alabama, to the late Luther J. and Mary Lucille Benton on January 30, 1934, passed away on July 20, 2021 from complications of Parkinson’s disease. Frank retired from First Tennessee Bank as Senior Vice-President. He was also a Certified Financial Planner. He served in the Marine Corp during the Korean Conflict and completed his military obligations in the reserves as a sergeant. He was a graduate of Auburn University and the University of Virginia School of Banking. He was an avid reader and he and Kathlene enjoyed traveling until his health declined. He was preceded in death by his first wife, Jean Hughen Benton, infant sister, Mary Florence Benton and brother, Luther J. Benton. He is survived by his wife, Kathlene of 44 years, daughter, Leigh (Roger) Espinoza and son Keith (Pam.) He will also be remembered by two special sisters-in-law, Willene Cooper of Johnson City and Jo Bays of Prattville, Alabama. He was a long time member of Grace Fellowship Church where he served as elder and a member of the finance team. The church was a key interest and source of strength to him. He was also on the board of the Haven of Mercy and served as chairman for a time. Services will be conducted at Grace Fellowship Church on Monday, July 26th at 7:00 P.M. with Revered Tom Oyler officiating. Visitation will follow at 8:00 P.M. Burial will be at Mountain Home National Cemetery on Tuesday, July 27th at 11:00 A.M. For those wishing to attend, please meet at the cemetery’s new annex by 10:50 A.M. Memorial donations may be made to Grace Fellowship Church, 2314 S. Greenwood Drive, Johnson City, TN 37604 or One Acre Café, 603 W. Walnut Street, Johnson City, TN 37604 in lieu of flowers. Pallbearers are Jeff Blackburn, Keith Bryant, David Chastain, Jerry Kunisch, Jud McGowan and Tim Richardson. Honorary pallbearers are Mike Hubbs, Rob Hughes, Wayne King, Benjamin Kisoni and Jim Love.

The family of Frank Delano Benton created this Life Tributes page to make it easy to share your memories.

Send flowers to the Benton family.