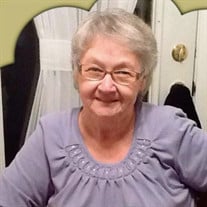 Flaura “Jeanette” Campbell, 81 of Elizabethton went home to be with the Lord Sunday, April 25, 2021 at Sycamore Shoal Hospital. She was born on November 8, 1939 to the late Roy and Lena Buckles Bowers. Along with her parents, she is preceded in death by her husband, Glenn Campbell and two brothers, Gary Bowers and Dairus Bowers. Jeanette was a homemaker who loved to cook and bake for her family. She collected recipes and tried many of them on her family. She was a loving wife, mother, grandmother and sister to all her family and will be forever missed. Survivors include two daughters, Jewell (Kenneth) Lowe and Leslie (Harold Lynn) Arnold all of Elizabethton; three grandchildren, who she spoiled all their lives, Brandi (Michael) Hartsell, Michael Bowers and fiancé Courtney McCury and Kenny Lowe, all of Elizabethton; two great granddaughters, Thea and Tegan Lowe; one sister, Judy (Shirrell) Bowers; three brothers, Randy (Betty) Bowers, Dewey (Judy) Bowers and Willard Loveless, all of Elizabethton. Several nieces and nephews also survive as well as her faithful loving grand-pup, “Ranger” who she adored. The graveside service will be conducted at 12:00 PM on Wednesday, April 28, 2021 in the Garland Cemetery, Bulldog Hollow Road with Mr. Kelley Bowers speaking. Active pallbearers will be her grandsons, Kenny Lowe and Michael Bowers; her son-in-law, Harold Lynn Arnold, Joel Kress and Malcom Kress, Larry Bowers and Chuckie Bowers. Honorary pallbearers will be all nephews and nieces, Tommy Campbell, Kenneth Lowe and Shirrell Bowers. Everyone will meet at the cemetery at 11:50 am. Anyone wishing to go by the funeral home and sign the registry may do so Wednesday morning. Family and friends may call on the family at the home of Daughter Leslie Arnold, 109 Nick Heatherly Road, Elizabethton.

Flaura &#8220;Jeanette&#8221; Campbell, 81 of Elizabethton went home to be with the Lord Sunday, April 25, 2021 at Sycamore Shoal Hospital. She was born on November 8, 1939 to the late Roy and Lena Buckles Bowers. Along with her parents, she... View Obituary & Service Information

The family of Flaura Jeanette Campbell created this Life Tributes page to make it easy to share your memories.

Flaura “Jeanette” Campbell, 81 of Elizabethton went home to be...

Send flowers to the Campbell family.