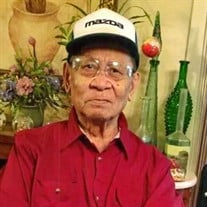 Our dad, papang, tatay, Eutiquio “George” Goron made it to be 93 years of age. George was of Elizabethton, Tennessee and passed away on Tuesday, October 26, 2021 at his residence. George was born in Leyte, Philippines on February 4, 1928 to the late Pedro and Prudencia Goron. In addition to his parents, George was also preceded in death by his first wife, Gloria Advincula and his second wife, Teresita “Tita” Matocino Goron. George retired as a manager of the Officer’s Club, United States Naval Base on Subic Bay in the Philippines. He was a Filipino Scout for the Filipino Army during World War II and was of the Catholic faith. George loved gardening especially the Filipino vegetables, going to the Cherokee Casino, and raising chickens – especially the fighting chickens. He loved going to his favorite place to eat at Hibachi Grill and he loved being with his family and friends. Those left to cherish George’s memory include his seven children, Grace Shoun (Henry), Raul Goron, Ofelia Banacia, Joselito “Boboy” Goron, Darwin Goron, Gilbert “Embot” Goron and George Goron, Jr. “Jun Jun”; twenty two grandchildren; several great grandchildren; two brothers, Saturnino Goron and Pablo Goron; and one sister, Juana. A gathering of remembrance for Eutiquio “George” Goron will be conducted from 4:00 PM until 6:00 PM on Friday, October 29, 2021 in the Chapel of Peace at Tetrick Funeral Home, Elizabethton. A memorial service will be conducted at a later date in the Philippines. The family would like to extend a special thank you to Amedysis Hospice- especially nurses Megan, Sarah and Melissa, to the Inpatient Surgery Department at Sycamore Shoals Hospital for taking such good care of George, all of our Filipino friends especially Connie (Bill), Carmen (Bo), Mally, Norma, Nancy, Nanay Tanya, Susan, Vivian and Ron, Farris Langford, Bob and Judy Wilson, Brenda and Linda for always sharing their food – Thank you all! And to my husband Henry Shoun and my kids, George and Nathan for taking care of him! Online condolences may be shared with the family on our website, www.tetrickfuneralhome.com, Tetrick Funeral Home, Elizabethton is honored to serve the Goron family. Office 423-542-2232, service information line, 423-543-4917.

Our dad, papang, tatay, Eutiquio &#8220;George&#8221; Goron made it to be 93 years of age. George was of Elizabethton, Tennessee and passed away on Tuesday, October 26, 2021 at his residence. George was born in Leyte, Philippines on February... View Obituary & Service Information

The family of Eutiquio "George" Goron created this Life Tributes page to make it easy to share your memories.

Our dad, papang, tatay, Eutiquio “George” Goron made it to be...

Send flowers to the Goron family.