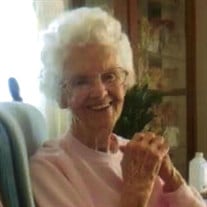 Ella Mae Jones Barnes, age 95 of Gray, Tennessee passed away on Wednesday, December 23, 2020 in the Johnson City Medical Center. She was a daughter of the late Joseph and Mary Ann Slaughter Jones, born to them on August 21, 1925 in Sullivan County, Tennessee. Ella united in marriage to William Barnes and to this union three children were born. Ella was a member of the Gray United Methodist Church. She was a wonderful cook and enjoyed caring for her family and others more than anything. She was and will always be loved by all. Along with her parents, she is preceded in death by a daughter, Linda Mae Barnes; a son, George Barnes; two brothers: George Buster Jones and Dickie Jones; five sisters: Hazel Fitzgerald, Thelma Friday, Leotta Constable, Wanda Jackson and Ruby Ford. She is also preceded in death by a great-grandchild, Kerensa Brinkley. Ella is survived by a daughter, Brenda Brinkley; her grandchildren: Johnny Brinkley (Cindy), James Brinkley (Christine), Linda Hurley (Rodney), Darren Barnes and Jonavan Barnes (Katie); Great-grandchildren: Jessica Brinkley, Justin Brinkley, Dakota Hurley, Kelsey Hurley, Dallas Brinkley, Kristy Hall and Rachel France; her great-great grandchildren: Madison, Makayla, McKinley, Macey, Ella, Erin, Thaileigh, and Isaac; Special friends, Mike and Mary Ella is also survived by a special niece, Valerie Ford as well a host of many other relatives and friends left behind to cherish her memory. A graveside service for Ella Mae Barnes will be conducted at 3:00 P.M. on Sunday, January 3, 2021 in the Washington County Memory Gardens with Rev. Aaron Atchley officiating. Pallbearers will be Justin Brinkley, Dallas Brinkley, Jessica Brinkley, Rachel France, Eric Barnes and Ronnie Ford. Honorary pallbearers will be Clay Hammons, Mike Compton, Jerry Barron, Rick Jones, Bill Bellamy and Ivan Barns. Those wishing to attend the graveside service are asked to meet at the cemetery no later than 2:50 P.M. Friends may call at Tetrick Funeral Services of Johnson City on Sunday, after 1:00 P.M. until 2:30 P.M. In lieu of flowers, memorial contributions may be made to the Gray United Methodist Church. Memories and condolences may be shared at www.tetrickfuneralhome.com. Tetrick Funeral Services 3001 Peoples Street Johnson City, TN 37604 (423-610-7171) is honored to serve the Barnes Family.

Ella Mae Jones Barnes, age 95 of Gray, Tennessee passed away on Wednesday, December 23, 2020 in the Johnson City Medical Center. She was a daughter of the late Joseph and Mary Ann Slaughter Jones, born to them on August 21, 1925 in Sullivan... View Obituary & Service Information

The family of Ella Mae Barnes created this Life Tributes page to make it easy to share your memories.

Send flowers to the Barnes family.