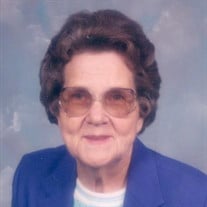 Mrs. Elaine Scott Cantrell, 93, of Chuckey, passed away Saturday, September 18, 2021, in the NHC Healthcare, Johnson City. Elaine was a lifelong resident of Washington County, Tennessee, born on May 20, 1928, in Johnson City, to the late Ralph Eugene Scott, Sr. and late Selma Elizabeth Bowman Scott. She spent her early years along Greenwood Drive in Johnson City. On June 28, 1945, Elaine began a 51-year career at Gloria Rayon, which became Burlington Industries, where she retired in 1996 as an Administrative Assistant, after serving as a style clerk. Elaine loved her family life as well as her work career. She married the late James Arnold Cantrell in 1950 in Washington County. She was the mother to two sons, she loved dearly, James Allen Cantrell and late Jeffery Scott Cantrell. One of her most favorite things to do was visit family and learn about it. She loved and cared for many people in her life including her two aunts, the late Bea Bowman and the late Nelle Scott. Nothing was more precious to her than her family. Over the last several years, one of her prides and joys was to host the family reunion, which included six families – the Scott, Huffine, France, Francis, Slagle and Price Reunion. In addition to hosting the family reunion, Elaine loved doing genealogy and learning about Washington County’s history. An avid historian and genealogist, Elaine has collected much on her families and Washington County’s past, where she was well-known for her hard work and energy placed in documenting and preserving the county’s past, and passing it on to the next generation, whether it was through a tour, a fair, or a program. From this work, over the last 50 years, she has performed several dozen cemetery surveys, as well as documented the history of schools in Washington County. In addition, she spent a good amount of time in Oak Hill Cemetery in Johnson City, where she led the research on the cemetery. She also photographed Washington County in a project from 2000 to 2003, where she photographed Washington County’s roads, schools, bridges, churches, and much more. This collection of photos has well documented Washington County at the turn of the century, with many of these buildings no longer standing. From this research and hard work came many awards including the Samuel Cole Williams Award from the Washington County Historical Association, the Hall of Fame Award from the Jonesborough Genealogical Society, the Community History Award and the Ramsey Lifetime Achievement Award from the East Tennessee Historical Society. Elaine also was part of many other projects that received awards over the years, which are too numerous to list. She was a member of the Watauga Association of Genealogists of Northeast Tennessee, the Boones Creek Historical Trust, the Greene County Genealogical Society, the First Families of Tennessee, the East Tennessee Historical Society, Heritage Alliance of Northeast Tennessee and Southwest Virginia, and Cemetery Survey Team of Northeast Tennessee. Elaine was also the first “Digging for Your Roots” Editor for the Jonesborough Genealogical Society from 1990 to 1992. She was an early member of the JGS and has served on the board of directors since 2010, as a strong heartbeat of the organization’s mission. Besides her work, family, and hobby lifestyle, her faith in God was evident throughout her life. Saved at an early age at Tiners Hill Methodist Church, Elaine has kept her faith throughout her lifetime. In 2017, she was baptized at Antioch Baptist Church as a statement of her faith at the age of 89. Since that time, Elaine has been a covenant member of Antioch Baptist Church in Johnson City, where she was a member of the Willing Workers Ladies Sunday School Class. In addition to her parents, Elaine was preceded in death by three brothers, M.F., Jack, and Eugene Scott, and one sister, Jeanette Moore; her husband, James Arnold Cantrell in 1986; and son, Jeffery Scott Cantrell in 2007. Survivors include her son and daughter-in-law, James Allen and Fawna Lee Cantrell, Chuckey; grandson and wife, Mark and Angel Bullen, Johnson City; and great granddaughter, Josie Bullen, Johnson City. Elaine is also survived by special friends, Chad Fred Bailey, Jonesborough; and Donna Wilds, Chuckey; caregivers: Kathy Briford and Velma Givens. The family of Mrs. Elaine Scott Cantrell will receive friends from 11 AM to 1 PM Thursday, September 23, 2021, in the Tetrick Funeral Services Chapel. The funeral service will follow at 1 PM with Mr. Lewy Cornett officiating. The graveside committal service will follow in the Monte Vista Memorial Park. Active pallbearers will be Chad Bailey, Brad Bailey, Michael Hartman, Ken Hart, Allen Jackson, and Mark Bullen. Honorary pallbearers will be Linda and Arthur Deyton and Members of the Jonesborough Genealogical Society. The family wishes to thank NHC Healthcare for their care of Elaine Scott Cantrell over the last couple months.

Mrs. Elaine Scott Cantrell, 93, of Chuckey, passed away Saturday, September 18, 2021, in the NHC Healthcare, Johnson City. Elaine was a lifelong resident of Washington County, Tennessee, born on May 20, 1928, in Johnson City, to the late Ralph... View Obituary & Service Information

The family of Elaine Scott Cantrell created this Life Tributes page to make it easy to share your memories.

Send flowers to the Cantrell family.