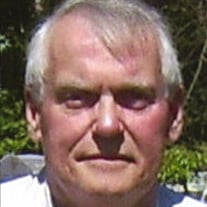 Edward Earl Cooper, age 72, of Elizabethton, Tennessee passed away on Tuesday, July 20, 2021 at his residence, following an extended illness. Edward was born in Berea, Kentucky to the late Lester John Cooper and Carmie Tutt Cooper. In addition to his parents, he was also preceded in death by his wife of 30 years, Patricia (Patty) Darlene Franklin Cooper. Edward was very bright, personable, kind and well read. He was very active in the mental health awareness community and had received several awards of recognition for his work in the mental health field. Edward loved his wife more than anything and was a man of great faith. Edward was also a United States Army veteran. He worked several odd jobs throughout his life before becoming the owner and operator of Cooper Tire for several years. Edward was of the Christian faith and loved to debate. At a young age Edward spent several years in Africa with his sister and parents on mission trips. He also enjoyed reading, writing and fishing and he had authored a book entitled “Whenever the Devil Deserts You” – a book about mental health – something he was very proud of and enjoyed discussing with his family. Those left to cherish Edward’s memories include two sisters, Janet Sue Green and husband Douglas of Greeneville, TN and Patricia Ann England and husband Russell of Gainesville, GA; two nieces, Cheryl Ann Martin and husband John of Evansville, IN and Susan England and husband Saro Azizian of Arlington, VA; three nephews, Thomas Jeffrey Edwards and wife Laurie of Detroit, TX, Lester John Edwards of Hugo, OK and Mark England and wife Tanya of Mableton, GA; and three grand nieces, Cassandra Weeks and husband Zachary of Blountville, TN, Drew Edward of Authur City, TX and Caroline Martin of Evansville, IN. A service to honor the life of Edward Earl Cooper will be conducted at 11:30 AM on Friday, July 23, 2021 in the Chapel of Tetrick Funeral Home, Elizabethton with Mr. Thomas Jeffrey Edwards, minister, officiating. The family will receive friends from 10:30 AM until 11:30 AM in the funeral home chapel, prior to the service on Friday. The graveside service will be conducted at 2:00 PM on Friday, July 23, 2021 in the Mountain Home National Cemetery, New Annex (215 Heroes Drive, Mountain Home, TN 37684). Active pallbearers will be selected from family and friends. Those who prefer memorials in lieu of flowers, may make donations to St. Jude’s Children’s Hospital, 501 St. Jude Place, Memphis, TN 38105. The family would like to thank Edward’s great niece, Cassandra Weeks and Amedysis Hospice for the wonderful care shown to Edward during his illness. Online condolences may be shared with the family on our website, www.tetrickfuneralhome.com Tetrick Funeral Home, Elizabethton is honored to serve the Cooper family. Office 423-542-2232, service information line, 423-543-4917.

The family of Edward Earl Cooper created this Life Tributes page to make it easy to share your memories.

Send flowers to the Cooper family.