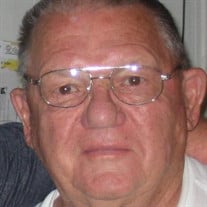 On Monday, May 25, 2020 Edward “Ed” Bailey passed away peacefully after an extended illness and went on to be with the Lord. We will miss him and look forward to seeing him in God’s splendor. Ed was born in Johnson City, TN to the late Joel and Mary Alice May Bailey. He was preceded in passing by his parents and two sisters; Elizabeth Bailey Ervin and Alma Clark Hicks. Ed was a loving husband, father, grandfather and great grandfather. He was a friend to all and a hardworking and humble man. He was of the Christian faith and a member of First Christian Church of Elizabethton. He was a member of the U.S. Armed Forces and served in the time of the Korean War in the Air Force. Ed loved the Lady Vols basketball team and scheduled his time around the games when basketball season commenced. He also enjoyed old movies and westerns. In his earlier years Ed taught at Elizabethton High School, but retired from teaching after 20 years to become a full time junk dealer. His passion was hunting for, buying and selling furniture and antiques. Left to cherish his memory is his loving and devoted wife of 57 years, Charlene Cameron Bailey; two children; Cameron and wife Tina, of Johnson City, TN, and Abby Bailey and wife Jessica Wheeler of Madison, WI. Also left to cherish his memory are three grandchildren; Michael Bailey and wife Sydney of Avon, IN, Jared Hamby and Kelsea Bailey, both of Johnson City, TN, and four great grandchildren; Berkley, Wailyn, Emersyn and Rhett Bailey all of Avon, IN. The graveside service will be officiated by Minister John Smith at Happy Valley Memorial Park on Thursday, May 28, 2020 at 1:30PM. Those who wish to make donations in lieu of flowers may donate to Ivy Hall Nursing Home. The family would like to extend a special thank you to the entire staff of Ivy Hall for their loving care and friendship. The Bailey family is in the service of Tetrick Funeral Home- Elizabethton. 211 N. Riverside Dr. Elizabethton, TN 37643. Phone: 423:542-2232. www.tetrickfuneralhome.com

On Monday, May 25, 2020 Edward &#8220;Ed&#8221; Bailey passed away peacefully after an extended illness and went on to be with the Lord. We will miss him and look forward to seeing him in God&#8217;s splendor. Ed was born in Johnson City, TN... View Obituary & Service Information

The family of Edward Ed Bailey created this Life Tributes page to make it easy to share your memories.

Send flowers to the Bailey family.