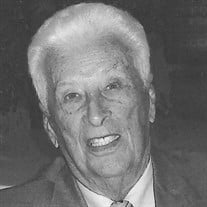 Earl Ellis, Jr., age 97, of Elizabethton, Tennessee went home to be with the Lord on Wednesday, October 21, 2020 at the Hillview Health Center of Elizabethton. Earl was born in Elizabethton to the late Earl Ellis, Sr. and Mary Lee Massengill Ellis. In addition to his parents, he was preceded in death by a daughter, Diana Lynn McClelland; three brothers, Kenneth Gene Ellis, C.S. Ellis and Lewis Ellis; a sister, Grace Boyd; and a great great granddaughter, Anna Belle Cole. Earl retired from the Elizabethton Post Office and was a United States Navy veteran, having served in World War II. He had achieved many naval medals during his valiant service. He was in the Hall of Fame and had been stationed on the Yorktown. He was a 52 year member of the American Legion and had performed over 1000 funerals with the Carter County Honor Guard. Earl was a 32nd Degree Mason of the Dashiell Masonic Lodge #238 F&AM and a member of the Captain Lynn H. Folsom VFW. He was a member of Borderview Christian Church where he helped with the construction of the church. Earl was a personable, generous, kind, Christian loving man and in his spare time he enjoyed Nascar, reading, yard work – especially his flowers and eating seafood. Those left to remember his legacy and cherish his many wonderful memories include two sons, Ron Ellis and wife Dee and Jim Ellis and wife Jody; a daughter, Jean Hart; his grandchildren, Marci McPeters and husband Bill, Regina Cole, Christy Britt, Amy Draper, Alena Adkins and husband James and Greg Hart; nine great grandchildren; three great great grandchildren; a sister, Betty Lawley; a special friend, Mabel Snavely; and several nieces, nephews and numerous friends, neighbors and veterans also survive. An open visitation for friends to register their presence and pay their respects will be conducted from 10:00 AM until 4:00 PM on Friday, October 23, 2020 at Tetrick Funeral Home, Elizabethton. A service to honor Earl’s life will be conducted at 2:00 PM on Saturday, October 24, 2020 in the Chapel of Peace at Tetrick Funeral Home, Elizabethton with Brother Scott Fisher, officiating. Music will be provided by Ray Don Markland, Scott Reynolds and the Borderview Christian Church Quartet. The family will receive friends from 1:00 PM until 2:00 PM in the funeral home chapel, prior to the service on Saturday. A committal and entombment will follow in the Mausoleum of Peace at Happy Valley Memorial Park. Military honors will be accorded by the Carter County Honor Guard. Active pallbearers will be Ray Don Markland, Joel Norris, Eric Montgomery, Eric Sams, Steve Replogle, Matt Fisher and Chris Timmons. Honorary pallbearers will be Al King and Lawrence Ritchie. The family would like to express a special thanks to Hillview Health Center for the loving care shown to Earl during his illness. Also to his sisters-in-law, Betty Ellis and Maxine Ellis for their love and compassion to Earl. Those who prefer memorials in lieu of flowers, may make donations to the Memorial Fund of Borderview Christian Church, 1338 Bristol Highway, Elizabethton, TN 37643 in honor of Earl. Due to the current COVID-19 regulations, our staff is committed to taking care of our guests and families that we serve. Please understand we will be following the State’s COVID guidelines. We also ask all guests and family members attending visitations and services to please bring and wear a mask. To watch the service live, click on the following link https://www.oneroomstreaming.com/view/authorise.php?k=160355994782617

Earl Ellis, Jr., age 97, of Elizabethton, Tennessee went home to be with the Lord on Wednesday, October 21, 2020 at the Hillview Health Center of Elizabethton. Earl was born in Elizabethton to the late Earl Ellis, Sr. and Mary Lee Massengill... View Obituary & Service Information

The family of Earl Ellis Jr. created this Life Tributes page to make it easy to share your memories.

Send flowers to the Ellis family.