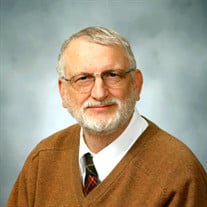 Dr. James Jackson Mooney, 81, of Johnson City, passed away Monday, February 8, 2021. He was known as “Jack” by many. He was a resident of Johnson City, Tennessee. He was the son of the late Charles and Johnnie Edith Mooney. As a young boy, Jack enjoyed running track, photography, and writing for the school newspaper. Jack graduated from Taneytown High School in Maryland in 1957. After graduation, he married and joined the Air Force. He was stationed in Ramstein, Germany and traveled around Europe. After returning from Germany, he began college at the University of Georgia where he earned an A.B.J. and M.A. degrees. He also earned his Ph.D. from the University of Tennessee. He has worked in television and for newspapers in Georgia, Maryland, and Germany. He also worked as a professor for 40 years at East Tennessee State University in Johnson City teaching Journalism. He authored a book of a history on the International Printing Pressman and Assistant’s Union of North America. Jack was a servant leader to many. He was a member of Watauga Avenue Presbyterian Church where he served as a Sunday School teacher and Elder for many years. He loved serving the Lord. “And thou shalt love the Lord thy God with all thine heart, and with all thy soul, and with all thy might,” Deuteronomy 6:5. In addition to his parents, Jack was preceded in death by one brother, Robert Mooney. Survivors include his wife of fifty-five years, Patricia Mooney; one daughter Jennifer Mooney Campbell and her husband Eric; Two brothers, Neil Mooney and his wife Jane, John Mooney and his wife Deborah. He has two grandchildren Evan and Anna Grace; several nieces and nephews. The family of Jack Mooney will have a private funeral service at Tetrick Funeral Home. The graveside service will be conducted at Evergreen Cemetery in Erwin, Tennessee. In lieu of flowers, please send contributions to Watauga Avenue Presbyterian Church in his honor at 610 E. Watauga Avenue, Johnson City, TN 37601.

Dr. James Jackson Mooney, 81, of Johnson City, passed away Monday, February 8, 2021. He was known as &#8220;Jack&#8221; by many. He was a resident of Johnson City, Tennessee. He was the son of the late Charles and Johnnie Edith Mooney. As... View Obituary & Service Information

The family of Dr. James Jackson Mooney created this Life Tributes page to make it easy to share your memories.

Send flowers to the Mooney family.