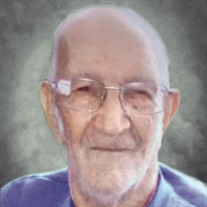 Doyle Brewer, age 89, of Carter County, Tennessee went home to be with his Lord on Thursday, February 24, 2022 following a brief illness. Doyle was born in Carter County to the late Paul and Laurina Presnell Brewer. In addition to his parents, Doyle was also preceded in death by his wife, Loretta Margaret Peeks Brewer in 2001. Doyle retired as a truck driver for Clark Lumber after many years of service. He would help anyone that was in need. He loved his grandchildren and great grandchildren and being outside, listening to country music and his beloved dog. Doyle was of the Christian faith. Those left to cherish Doyle’s memory include his son, Danny Lee (Kathy) Brewer; two granddaughters, Mindy (Shaun) Malone and Becky Brewer and fiancé Travis; his great grandchildren, Alexis Malone, Michelle Malone, Carter Malone, Bentley Malone and Chloe Babb; his step grandchildren, James Garland, Justin Garland, Abigail Garland and Damien Babb; his sisters, Virginia (Lewis) Blevins, Dimple Brewer and Birdie (Ed) Smith Peters; and his brother, Kaye (Phyllis) Brewer. Several nieces, nephews, cousins and neighbors also survive. The family would like to thank the doctors, nurses and staff of Sycamore Shoals ICU for their tremendous care of Doyle during his illness. A celebration of Doyle’s life will be conducted at 1:00 PM on Monday, February 28, 2022 in the Chapel of Peace at Tetrick Funeral Home of Elizabethton with Mr. Clarence Cannon officiating. The family will receive friends from 11:00 AM until 1:00 PM in the funeral home chapel prior to the service on Monday. The graveside service will follow in the Morrell Cemetery. Active pallbearers will be Mike Blevins, David Blevins, Jake Fagan, Danny Blakey, James Garland, Eddie Smith Peters and Frank Hamby. Honorary pallbearers will be Shaun Malone, Travis Babb and Bill Depew. Words of comfort can be sent to the family through our website, www.tetrickfuneralhome.com. Tetrick Funeral Home-Riverside Chapel, 211 North Riverside, Elizabethton, TN 37643 (423) 542-2232 is honored to serve the Brewer family.

Doyle Brewer, age 89, of Carter County, Tennessee went home to be with his Lord on Thursday, February 24, 2022 following a brief illness. Doyle was born in Carter County to the late Paul and Laurina Presnell Brewer. In addition to his parents,... View Obituary & Service Information

The family of Doyle Brewer created this Life Tributes page to make it easy to share your memories.

Send flowers to the Brewer family.