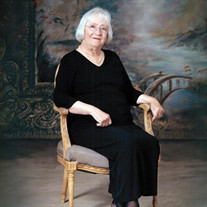 Click here to view a live stream of Dorothy's funeral ceremony Dorothy Adelia Owens Gibson, 96, of the Sulphur Springs Community near Jonesborough, passed away peacefully on Sunday, December 19, 2021 surrounded by her family. Dorothy was born January 29, 1925 at home in Kerens, Texas to Nannie Adelia Wheat Owens and William Dan Owens. She grew up in small towns in east Texas during the Great Depression. She learned the importance of family, live simply and frugally, work hard, be humble, and appreciate and treat everyone with respect and as equals. She was always an encouraging teacher, as well as a great conversationalist. Her smile, laugh, and zest for life were infectious. During her high school years in Athens, Texas she refined her skills as a clarinetist, playing in the marching band. She received numerous medals for her clarinet skills and gave solo performances at the State Fair of Texas and on the radio. While in high school, she was on the tennis team and won the Texas state junior championship. After college, she won the Texas state women’s open doubles tennis championship, and as an amateur she qualified to play at the US Open. In 1942, she entered North Texas State University and graduated with a B.A. degree in business administration. She briefly attended the University of Michoacan in Morelia, Mexico. After college, Dorothy taught high school in Woodville and Joinerville, Texas. She taught Spanish, English, bookkeeping, typing, and was a tennis coach, as well as band director. During her pre-med studies at University of Tennessee - Knoxville, Dorothy met the love of her life, Roger Edward Gibson. They married in her home town, Tyler, Texas, on September 4, 1948. Roger and Dorothy lived in Memphis, TN, Clarksville, AR, and returned to east Tennessee on July 1, 1951. The present day home was built in 1958, which was the center of activity for their five children. They operated a beef and dairy farming business, Alamede Farm, for 64 years. Dorothy was a loving wife, devoted mother, and created a nurturing environment for her five children. Many excellent meals were cooked and served by Dorothy at the hub of the home in the kitchen. She was active in the community and church, and enjoyed being involved in state and local politics. In addition to her parents, Dorothy was preceded in death by her husband Roger, her sister Fay and husband Carey Cruse, and her brother, William Dan Owens II and wife Billie Joy. She was also preceded in death by her in-laws: Zella and Luther Rodefer, Ralph and Lois Gibson, and Raymond Gibson. She was also preceded in death by her infant great-granddaughter Madison Fay Reed. Mrs. Gibson is survived by her children: Philip Gibson (and deceased wife Ann Stuckey Gibson), Paula Reed and husband Mark, Dr. Roger O. Gibson and wife Susan, Martha Gibson, and Dr. Mary Jane Gibson-Valk and husband Lee Valk. She is also survived by 11 grandchildren: Philip Gibson and wife Dr. Stacey Gibson, Ben Gibson, Justin Reed and wife Katie, Jennifer Porterfield and husband Stephen, Laura Bennington, James Reed and wife Jenni, Lisa Gibson Johnson and husband Kiel, Luke Gibson and wife Sheree, Alexandra Rodriguez, Ramiro Rodriguez, and Jenniffer Valk-Smith; 12 great-grandchildren: Ann Gibson, Jack Gibson, Jackson Reed, Owen Porterfield, Adelia Porterfield, Reed Bennington, Kyra Reed, Kamdyn Reed, Cooper Reed, Elizabeth Smith, and McKynlee Smith; sister-in-law Wanda Gibson, and 7 nieces, 5 nephews, and many cousins. The family will have a private service at noon Thursday, December 23 at Tetrick Funeral Services at 3001 Peoples Street, Johnson City. Dorothy’s nephew, The Reverend Ed Gibson will be officiating. Private burial will follow at the Gibson family cemetery, Watauga Flats, on Thursday, December 23. Pallbearers will be sons, sons-in-law, and grandsons. Honorary pallbearers will be nieces and nephews, Dr. Keith Cook, and Dr. Grant Taylor. The family appreciates the special loving care given by Ann Rankin, Tina Bowser, and Jan Schneider, as well as Allison Austin and her home care agency. Being matriarch of a large family, she was deeply and dearly loved by all. She will be remembered fondly by many and held in the highest regard by her family, friends, and neighbors. Dorothy’s influence will leave a lasting legacy. It is requested that anyone attending services here at the funeral home, please wear an appropriate face covering.

The family of Dorothy Adelia Owens Gibson created this Life Tributes page to make it easy to share your memories.