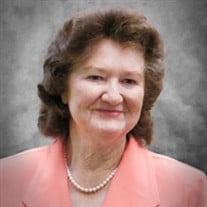 Dorothy Joselyn “Joyce” France, age 86, was an inspiration to all who knew her. After a thirty year battle with cancer, she passed away peacefully on November 30th in her home full of family and love. Dorothy was born in Johnson City to Ethel Bowman and Guy Denton. After losing her husband Herman “Tooter” France in 1993, she devoted herself to her family, her community and her church. A beloved member of Berea Free Will Baptist Church, she helped feed thousands of hungry people by serving as a founding volunteer of their food pantry. As a volunteer seamstress at the Mountain Home Veterans Administration for over 40 years, she helped clothe our veterans. She also regularly visited sick and elderly members of her community -- hundreds of people were comforted by her quiet, warm presence as they fought through their own difficult times. Dorothy loved visiting new places and saw the world, often with her favorite travelling companion, her niece Gloria. Her adventures took her from the beaches of California to the mountains of Canada, the waterfalls of Iceland, the highlands of Scotland and the Alps of Switzerland. A lifelong fisherwoman, she took any opportunity to fish every river, lake and ocean she encountered. Dorothy is preceded in death by her brothers, Arthur, William Leroy, Clingman “Cling”, Elmer, Cecil, William and Frederick “Fred”; sisters, Bessie, Vernia and Hazel. She is survived by her brother, Charles Denton and his wife Lulabelle of Johnson City; brother-in-law, Marion France of Michigan; children, Debbie France and Danny France of Johnson City; grandchildren, Danae Shell of Edinburgh Scotland, Valorie Jonas of Rochester New York, Dalton Shell and Derek France of Johnson City; great-grandchildren Brody and Tyson Jonas, and many loving nieces and nephews who cared for her and will cherish her forever, including Renee, Tammy, Kelly and Samantha. In accordance with her wishes, the family will hold a graveside service at Roselawn Memorial Park at 11 am on Wednesday, December 1, 2021. In lieu of flowers, the family requests that donations be sent to the food pantry at Berea Free Will Baptist Church, in Johnson City.

Dorothy Joselyn &#8220;Joyce&#8221; France, age 86, was an inspiration to all who knew her. After a thirty year battle with cancer, she passed away peacefully on November 30th in her home full of family and love. Dorothy was born in Johnson... View Obituary & Service Information

The family of Dorothy Joselyn "Joyce" France created this Life Tributes page to make it easy to share your memories.

Dorothy Joselyn “Joyce” France, age 86, was an inspiration to...

Send flowers to the France family.