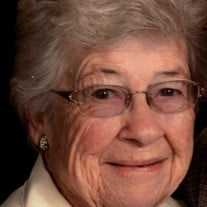 Mrs. Doris Pearl (Mays) Clark, 89, passed away on Monday, May 10, 2021 at Lakebridge Skilled Nursing Center in Johnson City, TN. Doris was born on July 1, 1931 in Oilton, Oklahoma. She was the youngest of seven children. Her parents were Roscoe and Stella Mays. Doris graduated from Oilton High School in 1948 and moved to Tulsa, OK soon after to attend Draughn’s Business School. She moved to Oklahoma City, OK in the early 1950’s where she worked as a secretary for an oil field supply house. In 1955 a friend arranged for her to meet Robert Clark, an US Air Force Navigator who was home on leave prior to a deployment to France. After a whirlwind romance and marriage in May, 1955, Doris and Bob moved to France for a year where they lived in a converted chateau and traveled extensively around Europe. Upon returning to the US, they settled in Oklahoma City and Bob finished his college education. In December, 1957, the first of their 4 children, David was born. After a move to Muskogee, OK in 1960, Bob and Doris had 3 more children, Shelley (1960), Scott (1962), and Brad (1964) to complete their family. Doris was a wonderful homemaker and mother and was active in Muskogee First Presbyterian Church. She also was well known throughout her life for her quick wit and funny antics. In 1967, Bob and Doris moved their family to western NY where they lived and raised their family for the next 22 years. Doris was active in her community, serving on the parks and recreation board for several years. She helped develop the local park in the neighborhood, both with landscaping and equipment purchases. In addition, she was an active member of Horseheads First Presbyterian Church and worked with youth groups and in the nursery. She enjoyed entertaining, gardening, traveling, and cooking – activities that she continued well into retirement. She was a voracious reader and always interested in history and biographical works. In 1988, Bob and Doris retired to Blue Eye, MO (near Branson, MO) and built their dream home which Doris enjoyed decorating and landscaping. She was actively involved in developing the community gardens and loved square dancing with Bob. She enjoyed going to community dinners (always bringing lemon pies to the delight of the other members), going to shows in Branson, cruising Table Rock Lake in their boat, welcoming family and friends to their home, and sitting on the porch watching activities on the lake for hours at a time. In addition, Doris and Bob travelled extensively for the next 30 years, going to Norway, China, Greece, Austria, England, and 49 of the 50 states. They also visited their children and grandchildren in NY, VA, NC, GA, and WI. Doris was active at St Andrew Presbyterian Church where she attended for more than 20 years. Doris was preceded in death by her parents, Roscoe and Stella, and her siblings, Marguerite, Ruth, Mildred, Royce (Short), Eugene (Smokey), and Thaddeus (Cotton). Survivors include her beloved husband, Bob, 4 children and their spouses, David and Jessica, Shelley and Troy, Scott and Stacy, and Brad and Sujata. In addition, Doris had 6 grandchildren that she loved dearly – Mallory, Madeline, Alison, Benjamin, Ethan, and Emily as well as 3 great grandchildren. Clark and Sandy Waggoner, her niece and husband, are particularly close with Bob and Doris. She also has many other nieces and nephews who loved her as well. A private celebration/memorial service will be held for Doris Clark at Grace Fellowship Church in Johnson City with a graveside service to be held at a later date. Memorial contributions can be made to St. Andrew Presbyterian Church in Kimberling City, MO.

Mrs. Doris Pearl (Mays) Clark, 89, passed away on Monday, May 10, 2021 at Lakebridge Skilled Nursing Center in Johnson City, TN. Doris was born on July 1, 1931 in Oilton, Oklahoma. She was the youngest of seven children. Her parents were... View Obituary & Service Information

The family of Doris Pearl (Mays) Clark created this Life Tributes page to make it easy to share your memories.

Send flowers to the Clark family.