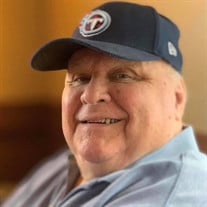 Donald Richard White of Kingsport, Tennessee, died June 8, 2021, after a heart attack. He was 82. Don was born April 21, 1939, in Los Angeles, California, and lived in the state until relocating to Wheaton, Illinois, in 2007 and Kingsport in 2014. Prior to the COVID pandemic, Don could be found every morning except Sunday sitting on a couch in a Tennessee Titans cap at Starbucks on Eastman Road in Kingsport. “It didn’t take long for him to become a friend to anyone,” John Goddard wrote in a Facebook tribute. “He always had encouraging words, a different insight, humor or wisdom seemingly when you most needed or weren’t expecting it. He built a group of diverse and wonderful-hearted Starbucks regulars who became a tribe.” One tribe member, Dean Kerkhoff, described Don as “a special person who managed to bring people together with just his words and human kindness.” He seldom started a sentence with the word “I.” He listened patiently to what others had to say, subtly sharing the Christian principles that guided his life. A graduate of El Monte High School in California, Don was a member of El Monte’s 1957 basketball team that won the California Interscholastic Federation (CIF) championship. He went on to star as a point guard at LIFE Bible College in Los Angeles, regularly posting double figures in both points and assists. He once scored 48 points in a game. This was pre-three point rule. Don was an ordained minister, pastoring a church in Livermore, California, and then working for United Parcel Service before owning and operating an office cleaning business in Bakersfield. Don is survived by a sister, Joann Keith of Wheaton, and a brother, Gaylon White of Kingsport; two daughters – Cindy Martinez and her husband, Albert, of Bullhead City, Arizona; Sheree Garcia and her husband, Gabriel, of South Gate, California; six grandchildren and nine great grandchildren. Don was preceded in death by a daughter, Jeanette Yani, and his father and mother, Rev. Hooper Walker and Mildred Joyce White. A memorial service will be held for Don at Port City Baptist Church in Kingsport where he was Sundays, the only morning he wasn’t making people feel special at Starbucks. The date is pending. Memories and condolences may be shared at www.tetrickfuneralhome.com. Tetrick Funeral Services, 3001 Peoples Street, Johnson City, TN 37604, (423) 610-7171, is honored to serve the White family during this difficult time.

Donald Richard White of Kingsport, Tennessee, died June 8, 2021, after a heart attack. He was 82. Don was born April 21, 1939, in Los Angeles, California, and lived in the state until relocating to Wheaton, Illinois, in 2007 and Kingsport in... View Obituary & Service Information

The family of Donald White created this Life Tributes page to make it easy to share your memories.

Send flowers to the White family.