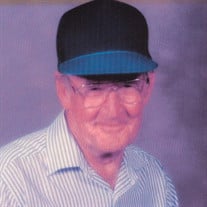 Donald James Byrd, age 91 of Hampton, beloved father, grandfather, and friend went home to be with the Lord on Saturday, May 22, 2021. He was the son of the late John and Etta Byrd. In addition to his mother and father, he was preceded in death by his baby daughter Rose Byrd, his brother Arnold Byrd, and the mother of his children, Dorothy Ward. Donald was employed by North American Rayon Corporation. He proudly served his country for three years during the Korean War in the United States Army, but he most proudly served the Army of the Lord. He was a faithful servant of God and a witness of Jesus’ love and sacrifice. He was a member of a gospel band, The Glory Bound Trio. He loved to praise God through song and was always willing to share a song about Jesus and a smile with everyone met. He was a member of Elk River Baptist Church and attended faithfully. He was also an avid fan of the Hampton Bulldogs and Tennessee Volunteers. Those left to cherish his memory include three sons, Darell G. Byrd,Johnson City, Jesse R. Byrd, Erwin, Kenneth L. Byrd and wife Pam, Hampton, three daughters, Ruby C. Pearson and husband Harell, Elizabethton, Brenda G. Pearson and husband Larry, Hampton, and Kathy Byrd of Hampton, sixteen grandchildren, twenty-five great grandchildren,five great great grandchildren, two sisters, Roxie Simerly and Coleen Bowling, and one brother, Ivan Byrd. Several nieces and nephews also survive. The family will receive friends on Wednesday, May 26 from 11:00 a.m until 1:00 p.m. A funeral service to celebrate the life of Donald James Byrd will be conducted at 1:00 p.m at Tetrick funeral home. A graveside service will immediately follow the funeral at Pearson/Byrd Family Cemetery (160 Brimer Road Elizabethton, TN) with Pastor Larry Pearson officiating. Active pallbearers include Derrick Byrd, Travis Orloff, Jay Crockett, Tim Orloff, Caleb Odom, Richard Largent, and James Toney. Honorary pallbearers include Gary Pearson, Chris Miller, and the deacons of Elk River Baptist Church. Music will be provided by Chaplain Chris Hughes and Mrs. Peggy Davenport. A thank you to some special people, Emily White and Amedisys Hospice, nurses and home health nurses, Amy and Melissa, special family members Martha and Ruby Odom, a special friend Ms. Connie, Elk River Baptist Church, Gary Pearson, chaplain Chris Hughes and all his faithful prayer warriors. Online condolences may be shared with the family on our website, www.tetrickfuneralhome.com, Tetrick Funeral Home, Elizabethton is honored to serve the Byrd family. Office 423-542-2232, service information line, 423-543-4917.

Donald James Byrd, age 91 of Hampton, beloved father, grandfather, and friend went home to be with the Lord on Saturday, May 22, 2021. He was the son of the late John and Etta Byrd. In addition to his mother and father, he was preceded in... View Obituary & Service Information

The family of Donald James Byrd created this Life Tributes page to make it easy to share your memories.

Send flowers to the Byrd family.