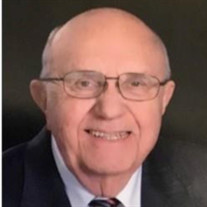 Don McNees Beasley Don McNees Beasley passed away on May 25, 2021, age 90. He was born in Johnson City, TN, grew up in Erwin, TN and received his undergraduate and Master’s degrees from East Tennessee State University. He subsequently served in the United States Army, stationed primarily in the South Pacific on the island of Eniwetok. Mr. Beasley spent the entirety of his career, starting in 1956, at Eastman Chemical Company in Kingsport, TN, retiring in 1996. He was an active member of First Broad Street United Methodist Church in Kingsport, TN for most of his life and later became a member of Grace Baptist Church in Elizabethton. He was preceded in death by his first wife, Lois Woods Beasley. He is survived by his second wife, Hettie Lyons Beasley and his daughter Mary Beth Beasley. He is also survived by several nieces and nephews including Patricia and Gerald Muncie and Michael and Vanessa Wood. Condolences are also extended to Stephanie Jeter and Tommy Lyons. The graveside service and interment will be conducted at 11:00 AM on Tuesday, June 1, 2021 at the Mountain Home National Cemetery (New Annex), 215 Heroes Drive, Mountain Home, TN. Military honors will be accorded by the VFW Post 2108 Honor Guard. Everyone will meet at the cemetery at 10:50 AM for the service. Online condolences may be shared with the family on our website, www.tetrickfuneralhome.com, Tetrick Funeral Home, Elizabethton is honored to serve the Beasley family. Office 423-542-2232, service information line, 423-543-4917.

Don McNees Beasley Don McNees Beasley passed away on May 25, 2021, age 90. He was born in Johnson City, TN, grew up in Erwin, TN and received his undergraduate and Master&#8217;s degrees from East Tennessee State University. He subsequently... View Obituary & Service Information

The family of Don McNees Beasley created this Life Tributes page to make it easy to share your memories.

Don McNees Beasley passed away on May 25,...

Send flowers to the Beasley family.