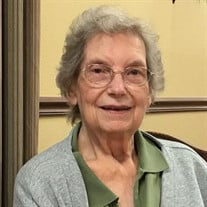 Dolores Beebe Riedel, 89, of Ormond Beach, FL, passed away April 18, 2022, after a period of declining health. Born December 26, 1932 in Jackson, Michigan, to the late Harold and Cleota (Dull) Beebe, Dolores graduated from Jackson High School in 1950. She married Richard F. (Dick) Riedel October 8, 1955, and later started their family in Jackson. They lived in Dayton, OH, and Farmington Hills, MI, prior to retiring in Johnson City, TN in 1992. In addition to her parents, Dolores was preceded in death by her husband of 47 years, Richard F. (Dick) Riedel in 2003 and their daughter, Susan Riedel Dorcey, in 2005. Dolores enjoyed cooking, sewing, quilting, and other crafts, traveling with Dick, and being active in her Lutheran church congregations. An accomplished pianist, organist, and choir member, Dolores passed along her musical abilities, crafting and cooking skills, and love of animals to their daughters. Left to cherish her memory is her daughter, Nancy Riedel, of the home in Ormond Beach, FL. The family of Dolores Riedel will receive friends Tuesday, April 26, 2022 from 12:30-1:30PM at Tetrick Funeral Services, Johnson City. A graveside service will be conducted at 2PM at Monte Vista Memorial Park. In lieu of flowers, those who prefer may make a donation to a favorite animal charity. Memories and condolences may be shared at www.tetrickfuneralhome.com. Tetrick Funeral Services, 3001 Peoples Street, Johnson City, TN 37604 (423-610-7171) is honored to serve the Riedel Family.

The family of Dolores Riedel created this Life Tributes page to make it easy to share your memories.

Send flowers to the Riedel family.