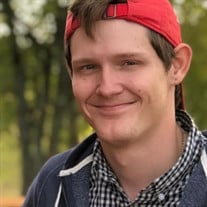 Dillian M. Bamman, loving son and brother, went to be with the Lord and his Grandma Betty in Heaven at age 29 on Tuesday, August 31, 2021. Dillian was born February 23, 1992, in Johnson City, TN to Rebecca McCoy. Dillian attended Daniel Boone High School, graduating in 2010. After attending The University of Tennessee Dillian served in the United States Air Force from November 2013 to 2016. He was stationed in Georgia and Korea. After returning home Dillian moved to Columbus, Ohio to attend The University of Ohio where he received his bachelor’s degree and began working on his master’s in mathematics. Dillian was a wonderful young man who took great pride in helping others in need. He gave his time, selflessly, without any thought of reward, often putting others’ needs above his own. He loved nature, often going hiking to waterfalls or natural overlooks to enjoy the beauty nature had to offer. He loved spending time outdoors in parks where he could indulge in another one of his passions- reading. DIllian loved to spend countless hours with his younger brother Zeke playing video games or just hanging out, the two had a special bond few brothers ever have. Dillian could talk for hours about mathematics and the new levels of complexity he had learned to solve; he was a truly brilliant young man. Dillian was a kind and loving son, brother, grandson, nephew, and friend, he will be greatly missed. His wonderful light burnt out too soon but left a lasting impression on everyone who knew him. Dillian is preceded in death by his loving grandmother, Betty M. Bamman of Johnson City, with whom helped raise him as a small child. They shared a special bond from his childhood until her death in 2015. Dillian is survived by his parents Rebecca and Tracy McCoy of Johnson City; sister, Britney Rose of Jonesborough, and brother Zeke McCoy of Johnson City; grandmother, Barbara Clark of Johnson City; grandparents, Tom and Barbara Bamman of Surgoinsville; uncle Buck and aunt Angel Bamman of Jonesborough; cousins, Alicia Bamman of Knoxville, Melanie Berry of Elizabethton, Jessica Johnson of Jonesborough, and Zaelyn Johnson of Jonesborough; along with girlfriend Brie Rhinehart of Columbus, Ohio. The family of Dillian M. Bamman will receive friends from 5 to 7 pm Thursday, September 9, 2021, at Tetrick Funeral Services. The funeral service will follow at 7 pm with Pastor Danny Osborne officiating. The graveside committal service will be conducted at 1 pm Friday, in the Mountain Home National Cemetery. Active pallbearers will be selected from family and friends. The Johnson City VFW Post # 2108 will accord military honors. Minister, family and friends are requested to meet at the cemetery by 12:50 pm Friday.

Dillian M. Bamman, loving son and brother, went to be with the Lord and his Grandma Betty in Heaven at age 29 on Tuesday, August 31, 2021. Dillian was born February 23, 1992, in Johnson City, TN to Rebecca McCoy. Dillian attended Daniel Boone... View Obituary & Service Information

The family of Dillian M. Bamman created this Life Tributes page to make it easy to share your memories.

Dillian M. Bamman, loving son and brother, went to be with the...

Send flowers to the Bamman family.