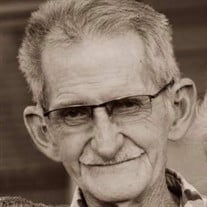 Dee Jay Littleton, age 81 of Jonesborough, Tennessee, passed away peacefully on Wednesday, June 3, 2020 surrounded by his loving family, as they sang ‘Go Rest High on That Mountain’ and ‘Amazing Grace.’ Dee was a son of the late Frank and Mae Light Littleton, born to them on November 24, 1938 in Washington County, Tennessee. He attended the McKinley Bible Study Church and served his country in the United States National Guard. He worked as a truck driver for H.T. Hackney and greatly enjoyed it. But more than anything, he enjoyed his family and spending time with them. Dee united in marriage to Anna Earldene Archer and to this union, six loving children were born. Along with his parents, he is preceded in death by his sisters: Vella Baines, Nora Bacon, and Gertrude Baines. His brothers: Frank Jr., Bob, Newt, Billy Guy, Orlan, Jay and Basil. His Daughter-in-law, Kristen Littleton. Dee is survived by his loving wife of over 60 years, Anna Littleton; his children: Sherry Day (Steve), Terry Blacksten (Donnie), Denise Butler (John), Norman Littleton (Sarah), Randy Littleton (April), Jonathan Littleton (Ashley); 13 grandchildren, 14 great-grandchildren, and 2 great-great grandchildren; a very special brother, Gene Littleton and his special dog, Bella. The family would like to extend their deepest gratitude to Dee’s granddaughter, Jessica Higgins who was his caregiver; the staff of Ballad Health Hospice and the ICU nurses of Franklin Woods Community Hospital. Also, the family would like to thank Pastor Lenny Smith, who was a dear friend to Dee during his life as well as Dee’s two oldest and dearest friends, Ed Gregg and Frankie Bacon. The family will hold a private memorial service for family and friends at a later date, to honor and commemorate Dee’s life. For those who wish, memories and condolences may be shared at www.tetrickfuneralhome.com. Tetrick Funeral Services 3001 Peoples Street Johnson City, TN 37604 (423-610-7171) is honored to serve the Littleton Family.

The family of Dee Jay Littleton created this Life Tributes page to make it easy to share your memories.

Send flowers to the Littleton family.