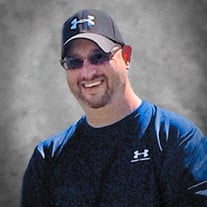 Mr. David Scott Hamilton, 42, of Johnson City, Tennessee, passed away Monday, January 31, 2022. He was the son of Gordon and Brenda Hamilton, a lifelong resident of Johnson City and a member of Cherokee United Methodist Church. David was a 1997 graduate of University School and attended East Tennessee State University. David was a man of many interests. He enjoyed the Space X Program, following Elon Musk’s many endeavors and accomplishments. He was an avid UT Vols fan, who never stopped trying to get his sister to stop cheering for the South Carolina Gamecocks. He also enjoyed fishing, especially fly fishing, hiking and golfing. David was an enthusiastic online gamer, connecting with many international players. David worked for Kroger, Johnson City the last eleven years and was the proud Fuel Lead, where his co-workers described him as “Everyone’s Friend,” “so positive and so much fun to work with.” “He was a team member who was kind to everyone and willing to help customers and staff whenever needed.” They particularly enjoyed his sense of humor at team functions like “Crazy Hat Day.” David was preceded in death by his paternal grandparents George W “Jake” and Carrie Carder Hamilton; and maternal grandparents Marvin “Pop” and Ada Scott Walter; as well as step grandmother Virginia Scott Walter. He is survived by his loving parents Gordon and Brenda Hamilton and his sister Amye Carol Hamilton, along with several special aunts, uncles and cousins. He also leaves behind his longtime best friend Chris Ervin. The family of David Scott Hamilton will gather with family and friends from 5pm-7pm, Monday, February 7, 2022 in the Tetrick Funeral Services Chapel. A Celebration of David’s Life will follow at 7pm with Reverend Joel Cook and Reverend Ricky Clowers officiating. A private family graveside committal service will be conducted at 10 am on Tuesday, February 8, 2022 at Monte Vista Memorial Park. Pallbearers are Scot Hamilton, Brian Hamilton, Matt Rowland, Jordan Bryant, Brandon Johnson, Chris Ervin, Jamaal Stephens, Matt Johnson, Ryan Broyles and Chris Boy. For everyone’s protection, attendees should practice social distancing, and the family respectfully requests anyone having Covid and/or symptoms are welcomed to call on the family at a later time. Additionally, visitors are requested to wear face masks. In lieu of floral arrangements, the family requests memorial donations be made to the Humane Society of Washington County in loving memory of David. Memorials and condolences may be shared at www.tetrickfuneralhome.com. Tetrick Funeral Services, 3001 Peoples Street, Johnson City, TN 37604 (423-610-7171) is honored to serve the Hamilton Family.

Mr. David Scott Hamilton, 42, of Johnson City, Tennessee, passed away Monday, January 31, 2022. He was the son of Gordon and Brenda Hamilton, a lifelong resident of Johnson City and a member of Cherokee United Methodist Church. David was... View Obituary & Service Information

The family of David Scott Hamilton created this Life Tributes page to make it easy to share your memories.

Send flowers to the Hamilton family.