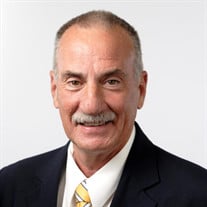 David F. Ensminger of Johnson City, TN, went home to his Lord on Tuesday, May 11, 2021, at the Johnson City Medical Center. He was born on December 21, 1945, in Athens, TN, the son of the late Neal and Maggie (Beaver) Ensminger. In addition to his parents, David was preceded in death by his brother, Buddy Arrants. David was a graduate of Tennessee Weslyan College and Vanderbilt Divinity School. He served various churches from 1972 to 2001. David worked at Tetrick Funeral Services as a funeral director and a family service counselor for 19 years. He helped many families in the area through their planning journey as they celebrated the life of their loved ones. David was an active member of Living Word Lutheran Church in Johnson City and was honored to serve the church in many capacities. He loved his Lord, his family, being Opa, his church, his Atlanta Braves, and the Vols. Those left to cherish David’s memory include his wife, Terry, of the home, his children, Charles (Cindy) Ensminger of Athens, TN, Duncan Whitney of Johnson City, TN, Casey (Daniel) Houseworth of Stuttgart, Germany, Kira (Christopher) Williams of Johnson City, TN, Cassi Lane of Johnson City, TN, Rianne (Jason) Johnston of Johnson City, TN, 19 beloved grandchildren, his brother, Richard (Joanne) Ensminger of Annandale, VA, and nieces, nephews, other relatives and friends. A service to celebrate David’s life will be held on Friday, May 14, 2021 at 5:00 pm, at Living Word Lutheran Church, 5210 N. Roan St., Johnson City, TN, 37615, (423) 467-9673, with Rev. Andrew Stuebs officiating. A reception will follow at the church after the service. A private family committal service will take place at Washington County Memory Gardens in Johnson City prior to David’s service on Friday afternoon. Pallbearers will be Charles Ensminger, Duncan Whitney, Jason Johnston, Caleb Lane, Samuel Lane, Jeremiah Lane, Cameron Williams, and Isaac Johnston. In lieu of flowers, memorials may be made to the Living Word Lutheran Church Building Fund. Memories and condolences may be shared at www.tetrickfuneralhome.com. Tetrick Funeral Services, 3001 Peoples Street, Johnson City, TN 37604, (423) 610-7171 is honored to serve the Ensminger family during this difficult time.

David F. Ensminger of Johnson City, TN, went home to his Lord on Tuesday, May 11, 2021, at the Johnson City Medical Center. He was born on December 21, 1945, in Athens, TN, the son of the late Neal and Maggie (Beaver) Ensminger. In addition... View Obituary & Service Information

The family of David Floyd Ensminger created this Life Tributes page to make it easy to share your memories.

Send flowers to the Ensminger family.