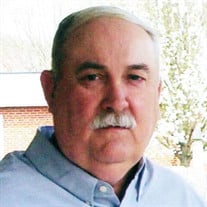 On Tuesday, July 6, 2021, David Arthur Caldwell, Jr (Johnny), age 75, of Hampton, Tennessee left this world at NHC Healthcare of Johnson City, for a better home. Born April 20, 1946 to the late David Arthur and Lue Dugger Caldwell, Johnny was a native of Butler, Tennessee but had lived most of his life in Hampton, Tennessee. In addition to his parents, Johnny was also preceded in death by five sisters and one brother. Johnny was a member of Pleasant Beach Baptist Church but attended Friendship Freewill Baptist Church. He had been employed as a mechanic and enjoyed spending his time with family and friends. Survivors include his wife of 38 years, Leslie Holden Caldwell; one daughter, Joy Caldwell Hall and husband Ronnie, of Elizabethton; one son, David Bruce Caldwell and his girlfriend Heather Gwinn and her daughter, Abby Gwinn, of Johnson City, TN; one grandson, Forrest Lee Hall, of Elizabethton; one brother, William Roger Caldwell, of Mountain City, TN; one brother-in-law, Danny Holden and wife Kim; and his mother-in-law, Lulabelle Fair. Several nieces and nephews also survive. The family will receive friends from 2:30 PM until 3:30 PM on Wednesday, July 7, 2021 in the Chapel of Tetrick Funeral Home, Elizabethton. A graveside service to celebrate the life of David Arthur Caldwell, Jr (Johnny) will be conducted following the visitation in the Whitehead Cemetery (Cable Hollow Road, Butler, TN) with Pastor John Hammett officiating. Music will be under the direction of Gracie Hammett. Active pallbearers will be selected from family and friends. Online condolences may be shared with the family on our website, www.tetrickfuneralhome.com, Tetrick Funeral Home, Elizabethton is honored to serve the family of David Arthur Caldwell, Jr. (Johnny). Office 423-542-2232, service information line, 423-543-4917.

The family of David Arthur (Johnny) Caldwell Jr created this Life Tributes page to make it easy to share your memories.

Send flowers to the Caldwell family.