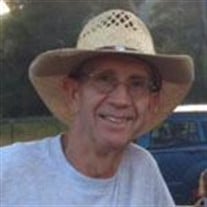 Danny Ray Cable, age 70, of Elizabethton, went home to be with his Lord on Thursday, September 14, 2017 from his residence. Danny was born in Carter County to the late Millard William Cable and Mary Bell Stout Cable. In addition to his parents, he was preceded in death by one brother, Elwood Von Cable. Danny had worked as a butcher for 17 years at Smithdeals and had also worked at Snap-On-Tools of Elizabethton for over 16 years. He was a United States Navy veteran, having served in the Vietnam War. He was a man of God and was of the Christian faith. He enjoyed camping, hiking, being outdoors, farming and helping those in need. Those left to cherish his memory include his wife of 47 years, Barbara Miller Cable, of the home; his daughter, Annette Broadbridge and husband Aidan, of Sweden; his son, Jackie Ray Cable, of Elizabethton; his grandchildren, Brett Allen Cable, of Elizabethton and Levi Aidan Broadbridge, of Sweden; eight brothers, Darrell Cable and wife Judith, of Marion, NC, Donnie Cable and wife Roberta, of Butler, Loyd Cable and wife Regina, of Hickory, NC, Dale Cable and wife Karen, of Hampton, Charles Cable and wife Janice, of Hampton, Ellis Cable and wife Belle, of Butler, Gary Cable and wife Rose, of Elizabethton and Jerry Cable and wife Sharon, of Butler; two sisters, Delores Hicks and husband Jerry, of Butler and Susie Carter and husband Bruce, of Elizabethton. Several nieces and nephews also survive, as well as his special friends, Allison and Jack Chidester, of West Carrolton, OH, Joy and Larry Kennedy, of Elizabethton, Paula and Wayne Phillips, of SC and M.E. Fair, of Elizabethton. A service to honor the life of Danny Ray Cable will be conducted at 7:00 PM on Tuesday, September 19, 2017, in the Chapel of Peace, Tetrick Funeral Home, Elizabethton with his brothers, Rev. Charles Cable, Mr. Donnie Cable and Rev. Darrel Cable, officiating. Music will be under the direction of his son-in-law, Aidan Broadbridge, violinist. The family will receive friends from 5:00 – 7:00 PM in the funeral home chapel, prior to the service on Tuesday; or at the residence at any time. The graveside service will be conducted at 11:00 AM on Wednesday, September 20, 2017, in the Cable Cemetery, Dye Leaf Road, in Butler. Military honors will be accorded by the Carter County Honor Guard. Active pallbearers will be selected from family and friends. Those wishing to attend the graveside service are asked to meet at Tetrick Funeral Home, Elizabethton at 10:00 AM on Wednesday, to go in procession to the cemetery. Those who prefer memorials in lieu of flowers, may make donations to the Carter County Rescue Squad, P.O. Box 682, Elizabethton, TN 37643 or to St Jude’s Children’s Research Hospital, 262 Danny Thomas Place, Memphis, TN 38105.

Danny Ray Cable, age 70, of Elizabethton, went home to be with his Lord on Thursday, September 14, 2017 from his residence. Danny was born in Carter County to the late Millard William Cable and Mary Bell Stout Cable. In addition to his parents,... View Obituary & Service Information

The family of Mr. Danny Ray Cable created this Life Tributes page to make it easy to share your memories.

Danny Ray Cable, age 70, of Elizabethton, went home to be with...

Send flowers to the Cable family.