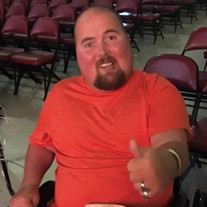 Click here to view a live stream of Daniel's funeral ceremony Daniel Keith Remine, 32, of Johnson City, passed away Monday, May 31, 2021, in the Johnson City Medical Center surrounded by his family. Daniel was a lifelong resident of Johnson City. He was the son of Tommy and Debbie Remine. Daniel had the singular goal of becoming a marine throughout his school career, and in his Junior year he joined Daniel Boone’s ROTC program, where he excelled. He received top marks in marksmanship and worked daily to achieve a peak physical condition. But on January 22, 2007 during his junior year, Daniel had a car accident, which left him in a coma for weeks. He suffered broken bones and a traumatic brain injury, which doctors predicted he would not survive. As the first few days in the Johnson City Med Center passed, his prognosis did not get better. His family was told he would not make it through the week. Over 500 students and visitors from all over Johnson City came to say their goodbyes. But Daniel persisted. His conditioned body refused to give out. A couple weeks later, his brother, Bryon, got close to his face, asked Daniel to give him The Rock’s signature “People’s Eyebrow,” and Daniel’s eyebrow lifted up, letting everyoneknow that he was indeed still inside. What followed was a grueling recovery, documented as a “Miracle from God,” and Daniel worked tirelessly to learn to walk again, talk again, and finishhis schoolwork, as he was in his senior year at Science Hill High School. Daniel was determined to walk across the stage at graduation to receive his diploma. With the incredible amount of support from our community, Daniel realized that dream and received his diploma in 2008, surrounded by his friends and family. Years passed, and Daniel’s amazing parents nurtured and cared for him. While he never joined the Marines as his heart desired, God’s plan showed us all that he still had so much love and support to give. He attended church, he made yearly trips to Florida to visit with family. He still went to the beach. He visited groups to stress the importance of using seat belts and driving safely. He lifted everyone around him with his infectious positivity. And he served as an inspiration with his determination and perseverance for those going through similar hard times. Daniel was a gift to all and will never be forgotten. It was thanks to his parents and brother and their unwavering care that allowed Daniel fourteen years of life after his accident, and he passed peacefully surrounded by his family. Daniel was preceded in death by his Grandfathers Robert Griffin and James D. Remine. Survivors include Daniel’s Grandmothers Frances Griffin and Peggy Adams; parents Tommy and Debbie Remine; brother Bryon Remine and his wife Sarabeth Remine, their children Caelyn, Riot and Lyric; Uncle Steve Griffin and his wife Tammy Griffin, their children Jessica, Jenna and Jalyn; aunts Debra Remine, Larent Gregg and her children Chris, Bobbie Marie, and Heather. Funeral services for Daniel Keith Remine, will be conducted on Thursday, June 3, 2021 at 12:00 noon in the chapel of Tetrick Funeral Services of Johnson City, with Pastor Michael Tadlock officiating. Burial will follow in the Monte Vista Memorial Park at 2:00 P.M. with family and dear friends serving as pallbearers. The family will receive friends at the funeral home on Thursday after 11:00 a.m. until the hour of service at 12:00 noon. This obituary was lovingly written by Daniel’s family. Memories and condolences may be shared at www.tetrickfuneralhome.com. Tetrick Funeral Services 3001 Peoples Street Johnson City, TN 37604 (423-610-7171) is honored to serve the Remine Family.

The family of Daniel Keith Remine created this Life Tributes page to make it easy to share your memories.

Send flowers to the Remine family.