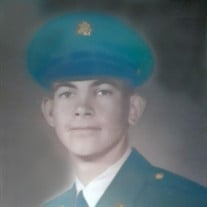 Dairus C. Bowers, age 77, of Elizabethton passed away on Wednesday, October 21, 2020 at the Johnson City Medical Center Hospital, following a brief illness. Dairus was the son of the late Roy and Lena Bowers. In addition to his parents, he was preceded in death by his late wife, Shirley Hambrick Bowers; and a brother, Gary Bowers. Dairus was retired from Mapes of Elizabethton. He loved being outside, mowing for other people, for many years. If he wasn’t mowing, he was working on lawn mowers for other people. Dairus loved his country and he served his country in the United States Army, having served in the 25th Infantry Division in Vietnam in 1964-1966. Those left to cherish his memories include two sons, Charles (Chucky) Bowers and Derrick Bowers, both of Elizabethton; his daughter, Natasha Rohloff and husband Ryan; two grandsons, Ashton and Daniel, both of Elizabethon; three brothers, Willard Loveless, Dewey Bowers and Randy Bowers, all of Elizabethton; two sisters, Jeanette Campbell and Judy Bowers and husband Shirrell; and two sisters-in-law, Betty Bowers and Judy Bowers. Several nieces, nephews, cousins, friends and neighbors also survive. A memorial service to celebrate Dairus’s life will be conducted at 6:00 PM on Monday, October 26, 2020 in the Chapel of Tetrick Funeral Home, Elizabethton with Mr. Gary Kemp providing a eulogy. Military honors will follow. Due to the current COVID-19 regulations, our staff is committed to taking care of our guests and families that we serve. Please understand we will be following the State’s COVID guidelines. We also ask all guests and family members attending visitations and services to please bring and wear a mask. The family would like to thank the doctors and nurses of the ICU Unit at Johnson City Medical Center for the exceptional care given to Dairus during his stay. The family requests any flowers purchased be purchased through Bowers Florist in Elizabethton. Online condolences may be shared with the family on our website, www.tetrickfuneralhome.com. Dairus and his family are in the care of Tetrick Funeral Home, Elizabethton, Office 423-542-2232, service information line, 423-543-4917.

Dairus C. Bowers, age 77, of Elizabethton passed away on Wednesday, October 21, 2020 at the Johnson City Medical Center Hospital, following a brief illness. Dairus was the son of the late Roy and Lena Bowers. In addition to his parents, he... View Obituary & Service Information

The family of Dairus C. Bowers created this Life Tributes page to make it easy to share your memories.

Dairus C. Bowers, age 77, of Elizabethton passed away on Wednesday,...

Send flowers to the Bowers family.