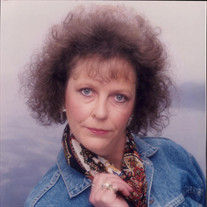 On December 20, 2020 Corvana Lynn Sheppard Grindstaff, age 65 of Elizabethton went to be with the Lord at Johnson City Medical Center after a lengthy illness. She was preceded in death by her husband, Kenneth &#8220;Kenny&#8221; W. Grindstaff... View Obituary & Service Information

The family of Corvana Lynn Grindstaff created this Life Tributes page to make it easy to share your memories.

Send flowers to the Grindstaff family.