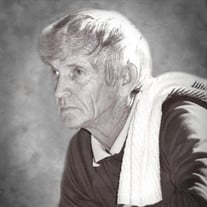 Coach Roscoe Craig “Charlie” Bayless, age 98, passed away peacefully on Monday, February 21, 2022, surrounded by those he loved. Charlie was born October 1st, 1923 in Jonesborough, TN to the late Courtney Edgar and Carrie Monday Parsons Bayless. Charlie was also preceded in death by his beautiful wife of 74 years Jane Allison Sisk Bayless in 2020; his sisters Beatrice Beals and Estella Mae Bayless. Bayless faithfully served his country and his community. As a World War II veteran, he fought in the Battle of the Bulge and served an MP traffic officer guarding high-ranking German officers standing trial for war crimes at Nuremberg Prison; on the basketball court coaching young men; and representing his constituents in the 5th District on the Carter County Commission from 1954 until his retirement. Bayless was a graduate of Happy Valley High School where he lettered four years in basketball, three in football, and one in baseball. He was a guard on the 1941 team that finished state runner-up and the 1942 team that reached the final four. After returning from the military in 1946, he married Jane Sisk and attended Milligan College and ETSU where he graduated in 1950 and returned to his alma mater as an assistant coach under Carl Gouge. He left Happy Valley for one year from 1951 to 1952 to coach Jonesborough and then returned to Warrior Hill to assume the head coaching position in 1953, where he roamed the sidelines for 59 seasons, with a white towel draped over his shoulder and his paddles he used to signal in plays. He coached the Warriors basketball team to 964 wins during his time as a head coach. He also led them to nine state tournament appearances and won a state championship in 1974. During his tenure he also won championships in other sports including football, baseball, track, and golf at Happy Valley. The school’s gym has long been named after him. Bayless was inducted to the Northeast Tennessee Sports Hall of Fame, the East Tennessee State University Sports Hall of Fame, the TSSAA Hall of Fame, and was part of the Carter County Sports Hall of Fame’s inaugural class.He famously coached in the 1989 McDonald’s All-American High School Basketball Game, alongside his best friend, Buck Van Huss. Charlie was also the subject of the book “100 Years a Warrior,” by Charles Peters and Rodger Snodgrass II, which details the impact he had on sports, the school, and the community. Aside from his sports career he served as a teacher and a Carter County commissioner for 54 years. In December of 2021, the County Commision saluted Bayless for his half-century service by unanimously voting to name a bridge spanning Buffalo Creek on Governor Alf Taylor Road in his honor near where he grew up. Bayless’ most proud legacy was that of a devoted family man. He leaves behind to cherish his memory and continue his legacy that includes his children, Sarae Trivett, Kathy Garland, Karen Goulds (Greg) and Charlene Bayless; his grandchildren, Kristen Taplin, Mandy Trivett, Gabriel Goulds (Katie), Melissa Ferraro (Jeff), Ross Garland, and Kortney Caldwell (Darren); great-grandchildren, Corbin Trivett, Dereck Taplin, Jada and Grady Goulds, Trinity and Taylor Hively, and Camdyn and Rylan Garland; nieces and nephews, Phyllis Parris Lachman, Billy Jack Parris, Diana Beals, Tony Griffith, Melissa Rowan Kennedy, Jeff and Wesley Sisk, Sandy Sisk Ripley. In lieu of flowers, donations may be sent to the Charlie and Jane Bayless Scholarship Fund (P.O. Box 498 Milligan College, TN 37682). A memorial service will be held at the Bayless Gymnasium on Friday, March 11th, 2022 at 6:00 p.m. Words of comfort can be sent to the family through our website, www.tetrickfuneralhome.com. Tetrick Funeral Home-Riverside Chapel, 211 North Riverside, Elizabethton, TN 37643 (423) 542-2232 is honored to serve the family of Coach Roscoe Craig “Charlie” Bayless.

The family of Coach Roscoe Craig "Charlie" Bayless created this Life Tributes page to make it easy to share your memories.

Send flowers to the Bayless family.