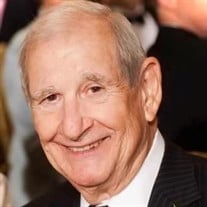 Click here to view a live stream of Mr. Reed's memorial service Clarence Dorsey Reed, 92, died on March 5, 2021 at Goodwin House in Falls Church, Virginia. He led an extraordinary life that took him from a one-room schoolhouse in rural East Tennessee to his retirement as an executive in charge of training for the U.S. branch of a major automobile manufacturer. More important to him and those he loved, he helped to mentor countless individuals he encountered along the way, transforming their lives and leading them to success in ways they never expected. The tributes to him from those he counseled virtually all reflect a common phrase: “he changed my life.” A loving husband and father and deeply religious person, he spent his life giving joy to others with his gentle sense of humor and genuine interest in anyone he chanced to meet. Dorsey was born on April 1, 1928, in Valley Forge, Tennessee to Frank and Elizabeth Reed. He graduated from Elizabethton High School in 1945 and enlisted in the U.S. Navy at the age of 17, serving in the Pacific on the destroyer U.S.S. Robert K. Huntington (DD781) until 1949. He was on the Huntington in July 1946 for the first atomic bomb tests at Bikini Atoll, which occurred within sight of his ship. He finished his naval service as a Gunner’s Mate Third Class, having been awarded commendations that included the World War II Victory Medal and the Asiatic-Pacific Campaign Medal. Dorsey’s first civilian job on his return to Elizabethton was as a deputy sheriff for Carter County. Using his GI Bill benefits he enrolled in classes at East Tennessee State College in Johnson City in September 1949, but could not finish his studies because the Army National Guard unit he had joined was called to active duty after the outbreak of the Korean War in June 1950. Before leaving for training at Fort Drum, Dorsey married Barbara Sue Jennings, another graduate of Elizabethton High School, who would be his beloved wife for the next 62 years, until her death in 2013. They spent their honeymoon in snowy Watertown, New York. Because of his prior leadership training in the Navy, Dorsey was selected to return to Tennessee to help prepare the next company of National Guardsmen. Prior to his retirement from the service, he rose to the rank of First Lieutenant and acting commander of the local National Guard company. Following his return to Elizabethton, Dorsey took vocational courses to become a lab technician and served in that role at local hospitals while his young family grew with the birth of two sons (Steve in 1952 and Kevin in 1956). In 1957, he was offered a position as a pharmaceutical representative for Bristol Myers, requiring a relocation to Little Rock, Arkansas and later to Nashville, Tennessee. Dorsey subsequently was hired as a director of training for Heil-Quaker, a manufacturer of HVAC equipment and then became the director of training for Nissan USA when the company established its first U.S. manufacturing plant in Smyrna, Tennessee. His pioneering health and wellness programs for Nissan employees garnered national recognition. Dorsey is survived by his two sons, Steven Reed and his wife Anne and retired USAF Maj. Kevin Reed and his wife Susan; three grandchildren, John Reed, Robert Reed and his wife Katie, and Margaret Reed Millar and her husband Tom; four great-grandchildren, Ruby Reed, Wells Reed, Jack Millar and Reed Dorsey Millar; and several nieces and nephews. A Celebration of Life for Dorsey will be held in the Tetrick Funeral Services Chapel in Johnson City on Saturday, June 26, 2021 at 11:00 a.m. The family will receive friends at the funeral home on Saturday after 10:00 a.m. until the hour of service at 11:00 a.m. A committal service will be held on Saturday, June 26, 2021 at 12:30 P.M. in the Happy Valley Memorial Park. Those wishing to attend are asked to meet at the cemetery no later than 12:20 p.m. The family suggests that donations be made to one of the following charities that Dorsey supported for many years: La BECA Women’s Scholarship Foundation, P.O. Box 7064, Alexandria, VA 22307 (www.labeca.org) Red Cloud Indian School, 100 Mission Drive, Pine Ridge, South Dakota 57770 (www.redcloudschool.org) St. Joseph’s Indian School, P.O. Box 326, Chamberlain, South Dakota 57326 (www.stjo.org)

The family of Clarence Dorsey Reed created this Life Tributes page to make it easy to share your memories.

Send flowers to the Reed family.