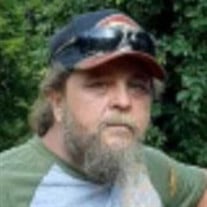 Clarence Emerson Frye, age 51, of Elizabethton, Tennessee passed away unexpectedly and went home to be with his Lord on Monday, August 16, 2021 at the Johnson City Medical Center. Clarence was born in Elizabethton to the late Clarence and Shirley Stines Frye. In addition to his parents, Clarence is also preceded in death by a sister, Mary Frye and a brother, Daniel Frye. Clarence was a loving husband and father to so many! He was a proud dad that stood up for the things and the people he believed in. Clarence was a mechanic and was always working on cars and traveling around. He was a member of the Elks Club and the Carter County Car Club and enjoyed camping, playing pool, classic cars and fishing. Most of all he loved helping raise his children and spending time with his family, especially his children and grandbabies and his dogs. Those left to remember and cherish Clarence’s many memories include his wife of 27 years, Vickie Frye of Elizabethton; his son, Clarence Frye and wife Sebrena of Elizabethton; his daughter, Geneva McKinney of Elizabethton; two sisters, Barbara Hammett and husband Robert of Elizabethton and Wanda Foulks and husband Jimmy of North Carolina; his grandbabies, Alisha, Mahayla and Tanner; his brother, Johnny Stines and wife Melinda of North Carolina; his nephew, Donald McKinney and wife Angel of North Carolina; nieces, Caitlin, Elizabeth, Little Barb, Stacy, Denise and several other nieces and nephews also survive. A service to celebrate the life of Clarence Emerson Frye will be conducted at 7:00 PM on Friday, August 20, 2021 in the Chapel of Tetrick Funeral Home, Elizabethton with Reverend John Hammett and Reverend Jeremy Burleson officiating. The family will receive friends from 5:00 PM until 7:00 PM in the funeral home chapel prior to the service on Friday. The family would like to extend a special thank you to the doctors and staff of Sycamore Shoals Hospital and Johnson City Medical Center for the care given to Clarence during his illness. Online condolences may be shared with the family on our website, www.tetrickfuneralhome.com, Tetrick Funeral Home, Elizabethton is honored to serve the Frye family. Office 423-542-2232, service information line, 423-543-4917.

Clarence Emerson Frye, age 51, of Elizabethton, Tennessee passed away unexpectedly and went home to be with his Lord on Monday, August 16, 2021 at the Johnson City Medical Center. Clarence was born in Elizabethton to the late Clarence and Shirley... View Obituary & Service Information

The family of Clarence Emerson Frye created this Life Tributes page to make it easy to share your memories.

Send flowers to the Frye family.