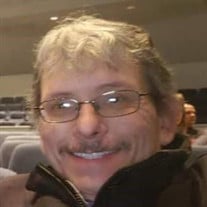 Click here to view a live stream of Christopher's service Christopher Dow Johnson, age 49 of Elizabethton, Tennessee passed away on Friday, January 15, 2021 in the VA Hospital of Johnson City. He was a son of Minus and Margie Whiteaker Johnson, born to them on October 1, 1971 in Tullahoma, Tennessee. Christopher proudly served his country in the United States Navy and the United States Army. Christopher is preceded in death by his father, Minus Johnson and a brother, Kevin Johnson. He is survived by his loving wife of 19 years, Jennie Huffman Johnson; his children: Annabell Johnson, Brittany Duehmig, Dakota Johnson and a step-daugter, Danielle Taylor; his mother, Margie Johnson; a sister, Kimberly Osborne; a step-granddaughter, Allison Taylor and his dear friend, Turbo. Christopher is also survived by a host of relatives and friends left behind to cherish his memory. Funeral services for Christopher Dow Johnson will be conducted on Wednesday, January 20, 2021 at 1:00 P.M. in the chapel of Tetrick Funeral Services of Johnson City. Christopher will be laid to rest in the Mountain Home National Cemetery, Mountain Home Tennessee on Thursday, January 21, 2021 at 10:00 A.M. Those wishing to attend are asked to meet at the cemetery no later than 9:50 A.M. The family will receive friends at the funeral home on Wednesday after 11:00 A.M. until the hour of service at 1:00 P.M. In lieu of flowers, donations made be made to the family. Memories and condolences may be shared at www.tetrickfuneralhome.com. Tetrick Funeral Services 3001 Peoples Street Johnson City, TN 37604 (423-610-7171) is honored to serve the Johnson Family.

The family of Christopher Dow Johnson created this Life Tributes page to make it easy to share your memories.

Click here to view a live stream of Christopher&#39;s service