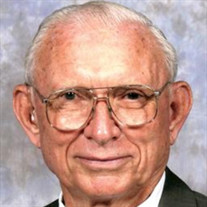 Charlie Newton Long Jr., 90, of Lake Alfred, Fla., died from complications of dementia on October 7, 2020, at his home in Elizabethton, Tenn. Born on July 25, 1930, in Glennville, Ga., he was the oldest of 10 children born to Charlie N. and Lilla Kate (Branch) Long. In 1952, he married Edna Grace Jordan, of Homerville, Ga., and fathered three children, Charlie N. Long III (Julie) of Elizabethton, Tenn., Judith Brown (Howard) of Lakeland, Fla., and K. Chris Long (Michelle) of Winter Haven, Fla. After moving to Florida, and with an entrepreneurial spirit, strong work ethic, and his wife’s assistance, Charlie opened and operated Long Enterprises — a trucking business, Long’s Garage — a diesel service and sales business, Central Park I — an RV Park, and two Manufactured Home Parks — Ridge Manor and Central Park II, all in Haines City. Believing in the value of community service, Charlie served as a City of Lake Alfred City Commissioner and Mayor. He was a founding Board of Directors member of the First National Bank of Polk County, which is now CenterState Bank, and an active member of Rotary International in Haines City, Fla., and Elizabethton, Tenn. He also served in the U.S. Army. A faithful disciple of Christ, Charlie was a member of the First Baptist Church of Lake Alfred for over 50 years serving as a deacon and in other ministries. He later joined First Missionary Baptist Church of Auburndale, and when in Tennessee, attended Central Baptist Church of Johnson City. He was a faithful husband, father, son, brother, community servant, and a trustworthy friend and business leader. In addition to his wife of 55 years, he was preceded in death in death by three sisters, Margaret Barlow, Ina Faye Schultz and Ann Harris, and one brother, Richard Long. Surviving siblings include Johnny Long (Annette) of Franklin, N.C., Timothy Long (Pam) of Ocala, Fla., Peggy Kirkland (James) of Franklin, N.C., Gaynell Locke (Larry) of Davenport, Fla., and Linda Casto (Larry) of Woodburn, Ore. He is also survived by five grandchildren and seven great-grandchildren. He leaves behind many loved in-laws, nieces and nephews. Funeral services will be held at First Missionary Baptist Church in Auburndale, Fla. (406 Main Street, Auburndale, Fla. 33823, Phone 863-967-2303) on Monday, October 12, at 11 a.m., with visitation immediately prior to the funeral from 10 to 11 a.m. The service will be live streamed via the church website, www.firstmbc.com, for those unable to attend. COVID-19 protocols will apply. In lieu of flowers, the family requests donations be made to the Alzheimer’s Association (www.ALZ.org) should you desire to do so in memory of Charlie. Mortuary services were provided by Kersey Funeral Home of Auburndale, Fla., and Tetrick Funeral Home of Elizabethton, Tenn.

Charlie Newton Long Jr., 90, of Lake Alfred, Fla., died from complications of dementia on October 7, 2020, at his home in Elizabethton, Tenn. Born on July 25, 1930, in Glennville, Ga., he was the oldest of 10 children born to Charlie N. and... View Obituary & Service Information

The family of Charlie Newton Long Jr created this Life Tributes page to make it easy to share your memories.

Send flowers to the Long family.