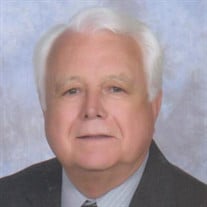 Charles Edward Minor, age 79, peacefully passed away on Friday evening, August 7, at the Johnson City Medical Center surrounded by his loving family. He was the son of the late Simp Minor and Ola Lipps Minor. He is survived by his wife of 55 years, Barbara Morefield Minor, daughter, Whitney Minor Bolton, and grandson, Riley James Bolton. He is also survived by several special nieces and nephews whom he adored. Born in Scott County, Virginia, he moved to Elizabethton at an early age and called East Tennessee home. He is preceded in death by his brother, Morris Minor, and his sister, Georgia Minor Williams, and two nephews, Glenn Williams and Michael Minor. Charles was a talented musician and played multiple instruments. This talent and love of music was passed on to his grandson, Riley, and Charles loved to see him play the drums in his band. He enjoyed entertaining his family and friends by playing guitar, violin, and piano. A perpetual prankster, he was known for always cracking jokes and causing mischief. One nephew recalls Charles as being “a good man who could make anyone laugh.” Another remembers, “He was always able to put a smile on someone’s face; a good man.” Charles was a member of Southwestern Baptist Church in Johnson City. He also owned and operated Charles Minor Contractors for many years and built many beautiful homes in the Tri-Cities area. He was a previous member of the Johnson City Homebuilders Association and the Kingsport Homebuilders Association. The family will greet friends to share memories on Tuesday, August 11, 2020, from 12:00 pm until a Celebration of Charles’ life at 2:00 pm in the Sunrise Chapel of Tetrick Funeral Services with Pastor Chase Royston officiating. A graveside service will follow at Happy Valley Memorial Park. Family and friends will serve as pallbearers. Memories and condolences may be shared at www.tetrickfuneralhome.com. Tetrick Funeral Services, 3001 Peoples Street, Johnson City, TN 37604 (423-610-7171) is honored to serve the Minor family during this difficult time.

Charles Edward Minor, age 79, peacefully passed away on Friday evening, August 7, at the Johnson City Medical Center surrounded by his loving family. He was the son of the late Simp Minor and Ola Lipps Minor. He is survived by his wife of 55... View Obituary & Service Information

The family of Charles E. Minor created this Life Tributes page to make it easy to share your memories.

Send flowers to the Minor family.