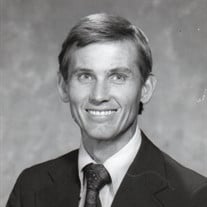 Chapman Lawrence Porterfield passed away February 22nd. Lawrence was peacefully surrounded by his family and loved ones at his home in Johnson City, TN. Originally from Roanoke, Virginia – Lawrence and Brenda, his loving wife of fifty-one years, made Johnson City, TN their family home after time spent in St. Louis, MO and Montgomery, AL. Lawrence was a graduate of East Tennessee State University. Lawrence had a successful business career as an executive with Rice Bottling Company – however he never focused on his own personal success – instead, he prioritized treating colleagues, and the communities he served with the utmost respect and attention. As he was once quoted saying “I just want to treat people well and sell some Pepsi – Cola. That goes a long way” What he was most passionate about was his family, friends, faith in God, cars (wow he had a lot of them over the years), and many athletic / competitive pursuits. Some of his fondest times with friends were competing in Golf, Pool, Ping Pong, and Gin Rummy. After his retirement, Lawrence learned to ski, and that became an incredible passion for him and his family. He created countless memories and experiences for his family and even friends of his children travelling out West to explore the mountains of Utah and Colorado. You could often hear Lawrence talking about the people and traveling to places he loved – the love of his Life Brenda, his children Margaret, Chapman, and Stephen – and some of the most special places on earth to him – Grandfather Mountain, NC and Alta, Utah. Later in his life – Lawrence’s eyes were filled with joy watching his grandchildren grow. He even found a way to turn his Pool Rehab into a time spent with family and grandkids swimming. Lawrence persevered his entire life through different neurological diseases that physically affected his ability to do many of the things he loved. He maintained optimism, always strived for the next goal in the face of odds, and personified living for the day and the moment. He had a natural gift for living in the present which allowed him and those he was with to fully enjoy and appreciate the day and moments – and he passes on a lifetime of incredible stories and lives touched through this gift. Our family would also like to personally thank the many wonderful people that have helped not only to take care of our father….but provided love, laughter, memories and lifelong friendships. A very heartfelt thank you to Sandy Gregg. Lawrence is survived by his wife Brenda, daughter Margaret Longhouser her husband Mike Longhouser and two daughters Addison and Insley, his son Chapman Porterfield his wife Katie and children Miller, Maggie, and Tripp, his son Stephen Porterfield and his wife Jennifer and children Owen and Adelia. The family asks any memorial contributions be made to Parkinson’s Disease, Charcot-Marie-Tooth Disease, East Tennessee Coalition for Kids and Duke Neurology. No memorial service is planned at this time.

Chapman Lawrence Porterfield passed away February 22nd. Lawrence was peacefully surrounded by his family and loved ones at his home in Johnson City, TN. Originally from Roanoke, Virginia &#8211; Lawrence and Brenda, his loving wife of fifty-one... View Obituary & Service Information

The family of Chapman Lawrence Porterfield created this Life Tributes page to make it easy to share your memories.

Send flowers to the Porterfield family.