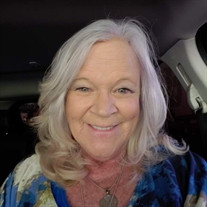 Cathleen “Cat” Vess, 63, of Roan Mountain, TN passed away on Monday, January 10, 2022. Cat was born and raised in Cheektowaga, NY, near Buffalo, where she attended Maryvale High School. After high school Cat joined the United States Marine Corps where she earned the rank of Sergeant. After the Marine Corps, Cat married, and raised a beautiful daughter. Cat began her career in hospitality in Myrtle Beach, SC. Most notably, she was promoted to property manager of a resort in Banner Elk, NC. While working, she attended Lees-McRae College where she graduated cum laude with a Bachelors in Business. In addition to property management, Cat also spent time as a long haul truck driver often times traveling across the entire United States. Cat was a devout Catholic who was dedicated to her church and the many charities she supported. Cat settled in Roan Mountain, TN with her husband, Mark and 2 beloved dogs, Baron and Gracie. Cat was preceded in death by her first husband, Bruce Guiles; mother and father, Russ and Rose Marie Haentges. Cat is survived by her husband, Mark Vess; daughter, Kim Collins and husband Shawn; stepdaughter Mollie Vess and stepson Clayton Vess and several loving brothers and sisters. A memorial mass for Cathleen “Cat” Vess will be conducted on Thursday, January 13, 2022 at 11:00am at St. Mary’s Catholic Church with Father Dustin Collins officiating. The family would like to thank the PCU staff at Sycamore Shoals Hospital. Memories and condolences may be shared at www.tetrickfuneralhome.com. Tetrick Funeral Services 3001 Peoples Street Johnson City, TN 37604 (423-610-7171) is honored to serve the Vess Family.

The family of Cathleen "Cat" Vess created this Life Tributes page to make it easy to share your memories.

Send flowers to the Vess family.