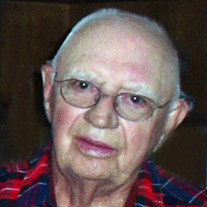 Calvin C. Caldwell, age 94, of Elizabethton, Tennessee passed away on Sunday, May 24, 2020 at Hermitage Rehabilitation Center of Elizabethton, following an extended illness. Calvin was born in Princeton, West Virginia to the late Thomas A. Caldwell and Madge Thompson Caldwell. In addition to his parents, he was preceded in death by his wife, Mary Ellen Caldwell; a brother, William “Bill” Caldwell (who was a veteran of the Korean War); and a sister, Mary Etta Willis. Calvin had worked as both a carpenter and as a taxidermist. He was a proud United States Army veteran, having served his country in World War II. Calvin was a member of the VFW, the DAV and the local Senior Citizens Center. Those left to cherish his memory include a brother, Richard Caldwell, of Houston, Texas; a nephew, Thomas Caldwell, of Elizabethton; a niece, Barbara Roeder, of Monument, CO; and several other nieces, nephews and cousins also survive. As well as two close friends, Jean Champion, of Knoxville and Sue Bowers, of Elizabethton A graveside service to honor the life of Calvin C. Caldwell will be conducted at 3:00 PM on Thursday, May 28, 2020 at Happy Valley Memorial Park with Pastor John Stevens, officiating. Those attending are asked to wear a mask or facial covering. Everyone will meet at the cemetery at 2:50 PM on Thursday. Friends may also call at Tetrick Funeral Home, Elizabethton on Thursday, May 28, 2020 between the hours of 9:00 AM and 1:00 PM to sign the register book. The family would like to especially thank the staff and doctors of Hermitage Rehabilitation Center for the exceptional care shown to Calvin during his illness. Online condolences may be shared with the family on our website, www.tetrickfuneralhome.com Calvin and his family are in the care of Tetrick Funeral Home, Elizabethton. Office 423-542-2232, service information line, 423-543-4917.

Calvin C. Caldwell, age 94, of Elizabethton, Tennessee passed away on Sunday, May 24, 2020 at Hermitage Rehabilitation Center of Elizabethton, following an extended illness. Calvin was born in Princeton, West Virginia to the late Thomas A.... View Obituary & Service Information

The family of Calvin C Caldwell created this Life Tributes page to make it easy to share your memories.

Send flowers to the Caldwell family.