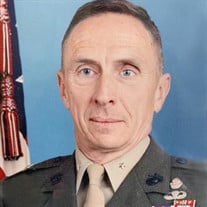 Brigadier General Russell H. Sutton, USMC Ret. of Roan Mountain, Tennessee went home to be with the Lord on Saturday, March 19, 2022 at Sycamore Shoals Hospital at the age of 81. Russell was born in Nashville, Tennessee on July 11, 1940 to the late Dr. William Russell Sutton and Maryls Rieke Sutton. In addition to his parents, Russell was also preceded in death by a sister, Frances Holliday. General Sutton graduated from the University of Alabama with a double Master’s Degree in Physical Education and Mathematics in 1964 and was commissioned a second lieutenant in the Marine Corps upon completion of the Officer Candidates School, Quantico, Virginia in November 1964. Following completion of the Basic School at Quantico, General Sutton transferred overseas where he served as a rifle platoon commander with the 2nd Battalion, 9th Marines in the Republic of Vietnam. Upon his return from Vietnam in May 1966, he served as a platoon commander and physical training instructor at the Officer Candidates School, Quantico. He returned to Vietnam in 1968, where he served as Company Commander, Company F, 2nd Battalion, 9th Marines and as a Battalion Logistics Officer. Transferring back to the states, he completed the Amphibious Warfare School in 1970. He then served as the Ground Exchange Officer with the British Royal Marines assigned to 41 Commando stationed in the United Kingdom and Malta. From 1972 until 1975, General Sutton was an instructor at the United States Naval Academy and was subsequently reassigned to the 2nd Marine Division, Camp Lejeune, North Carolina, for duty as a Battalion Operations Officer, 1st Battalion, 8th Marines, Operations Officer, 8th Marines; and Assistant G-3 Training Officer, respectively. General Sutton’s next assignment was to the United States Naval War College, Newport, Rhode Island, where he was a student until 1970. He then departed the U.S. to serve as the Ground Operations Officer, C-3 Combined Forces Command, Republic of Korea. In July 1980, he began preparation for duty at JUSMAGTHAI by attending the Defense Language Institute, Presidio of Monterey, California. He arrived in Thailand in June 1981 to serve as Senior Marine Officer and Royal Thai Marine Corps Force Requirements Officer. From 1984 to 1985, General Sutton was a student at the Air War College, Maxwell Air Force Base, Alabama. Upon completion of school, he served as the Director, Staff Planning School, Landing Force Training Command, Pacific, Coronado, California. Brigadier General Russell H. Sutton retired from the Marine Corps on October 1, 1994. His last active duty assignment was as the Commanding General, Marine Corps Air Ground Combat Center, Twentynine Palms, California. Aside from his prestigious military career on the battlefields of Vietnam, Panama and Desert Storm, General Sutton retired to the Roan Mountain Community and was a substitute teacher at Cloudland High School in the 1990s and enjoyed working with veterans in the area. General Sutton was a member of Back Country Horsemen of Northeast Tennessee and helped establish a trail head on Walnut Mountain Road. He loved his farm and his horses and was a fixture in the Roan Mountain Community. Those left to continue General Sutton’s legacy and cherish his many wonderful memories include his wife, Linda Lee Sutton of the home; two sons, Benjamin Lee Sutton and wife Audrea of Homewood, Alabama and William Sutton and wife Jennifer of Vienna, Virginia; six grandchildren, Mallory Lee Sutton, Bailey Renee Driver, Benjamin Matthew Sutton, Russell Liam Sutton, Daniel Gerald Sutton and Jonathan Lloyd Sutton; two great grandchildren, Adeline Jaymes Driver and Harvey Dee Driver; and one brother, Dr. Donald Wesley Sutton of Goldstein, Alabama. Several nieces and nephews also survive. A service to honor the life of Brigadier General Russell H. Sutton will be conducted at the Arlington National Cemetery at a later date. The family requests donations in lieu of flowers be made in honor of Brigadier General Russell H. Sutton to the local veteran’s organization of your choice. Words of comfort can be sent to the family through our website, www.tetrickfuneralhome.com. Tetrick Funeral Home-Riverside Chapel, 211 North Riverside, Elizabethton, TN 37643 (423) 542-2232 is honored to serve the Brigadier General Russell H. Sutton family.

Brigadier General Russell H. Sutton, USMC Ret. of Roan Mountain, Tennessee went home to be with the Lord on Saturday, March 19, 2022 at Sycamore Shoals Hospital at the age of 81. Russell was born in Nashville, Tennessee on July 11, 1940 to... View Obituary & Service Information

The family of Brigadier General Russell H. Sutton USMC Ret. created this Life Tributes page to make it easy to share your memories.