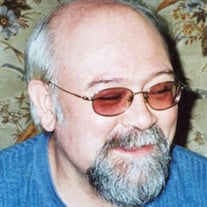 Bradley Keith Gouge, age 60, of Elizabethton, Tennessee passed away unexpectedly on Saturday, April 17, 2021 in Johnson City. Brad was born in Elizabethton to Kenneth Gouge, of Amarillo, Texas and Dorothy Holdren Gouge, of Elizabethton. Brad worked as a forklift operator for Snap On Tools for many many years and was a United States Navy veteran. Those left to cherish Brad’s memory include his parents; two sons, Taylor Gouge and Trevor Gouge, both of Elizabethton; two brothers, Derrick Gouge, of Jonesborough, TN and Kenneth Randall Gouge, of Riceville, TN; and two sisters, Teresa Epperley, of Elizabethton, TN and Michelle Bandy, of Yukon, Oklahoma. Many cousins, nieces, nephews and friends also survive. A gathering of remembrance for Brad will be conducted at 6:00 PM on Saturday, April 24, 2021 at Beck Mountain Church. A private graveside service will be conducted in the Gouge Cemetery in Roan Mountain. Memories and condolences may be shared at www.tetrickfuneralhome.com. Tetrick Funeral Home, 211 N. Riverside Drive, Elizabethton, TN 37643 (423-542-2232) is honored to serve the Gouge family.

The family of Bradley (Brad) Keith Gouge created this Life Tributes page to make it easy to share your memories.

Send flowers to the Gouge family.