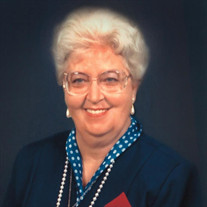 Bobbie L. Moody, age 84 of Gray, Tennessee, went home to her heavenly father on Friday, September 24, 2021 at her home. She was the daughter of the late Samuel Paul and Edna Trivett Bacon, born to them on March 8, 1937 in Holston Valley, Tennessee. She attended the Harmony Baptist Church. Bobbie loved nature, and would spend much of her time watching animals in her yard, some of which she would name. Her love of music, especially hymns was very special to her, but not as special as the love she had for her children and grandchildren. Bobbie united in marriage to G.C. Moody and to this union 3 children were born. Along with her parents, she is preceded in death by her husband G.C. Moody, her son Ashley Moody, and a brother, Homer Bacon. Bobbie is survived by her loving children; Eric Moody, and Crystal Moody Bowers (Keith), a brother, Billy Bacon (Margie), two grandchildren, Wyatt and Tara Bowers. She is also survived by many other relatives and friends left behind to cherish her memory. Funeral services for Bobbie L. Moody, will be conducted on Tuesday, September 28, 2021 at 7:00 P.M. in the chapel of Tetrick Funeral Services with Rev. Steve Pate officiating. The Moody family will receive friends at the funeral home on Tuesday evening after 5:00 P.M. until 7:00 P.M. A committal and interment service for Bobbie will be held on Wednesday, September 29, 2021 at 10:00 A.M. in the Gray Cemetery with Keith Bowers, Wyatt Bowers, Steven Bowers, Robbie Bacon and Brian Bacon serving as pallbearers. Those wishing to attend are asked to meet at the cemetery no later than 9:50 A.M. The family would like to extend their deepest gratitude to Bobbie’s caregivers, Judy Cantrell, Beth Ayers and Linda Roper as well as Bobbie’s nurse, Vanessa with Amedisys Hospice. Memories and condolences may be shared at www.tetrickfuneralhome.com. Tetrick Funeral Services 3001 Peoples Street Johnson City, TN 37604 (423-610-7171) is honored to serve the Moody Family.

Bobbie L. Moody, age 84 of Gray, Tennessee, went home to her heavenly father on Friday, September 24, 2021 at her home. She was the daughter of the late Samuel Paul and Edna Trivett Bacon, born to them on March 8, 1937 in Holston Valley, Tennessee.... View Obituary & Service Information

The family of Bobbie L. Moody created this Life Tributes page to make it easy to share your memories.

Send flowers to the Moody family.